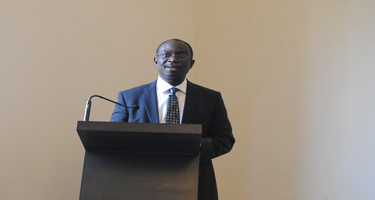 Ghana is at final joint assessment stage of its FLEGT Voluntary Partnership Agreement and keen to promote its achievement, what it means on the ground and to counter ‘myths’ about the value of FLEGT. That was the message from Chris Beeko (pictured left) of the Ghana Forestry Commission, opening Workshop 3 of the Trade Consultation, which focused on FLEGT implementation progress in Africa and the experience of EU producers operating on the continent.

Underlining the country’s commitment to broadcast its latest VPA developments, said Mr Beeko, he had recently been part of an awareness-raising mission to five EU countries.

“Our final joint assessment looks at whether the Ghana Legality Assurance System delivers the intended results, the capacity of the country to implement it and if amendments to the system, recommended following the first technical evaluation, have been made – which it concluded they had,” said Mr Beeko. “It also evaluated capacity to apply FLEGT licences, alignment of legal timber right holdings with the current legal regime and whether timber harvesting is in line with forest management rules.”

The next steps, he added, would be to take remedial actions on non-compliance identified by the assessment team. The latter would then ensure these were adequate before submitting a report to the Joint Monitoring and Review Mechanism (JMRM).

Depending on the report’s findings, the latter would subsequently “communicate Ghana’s readiness for licensing”.

While the technical process continued, said Mr Beeko, it was also key for Ghana to tackle gaps in market knowledge about FLEGT, particularly relative to certification. It needed to be better understood that it ‘transformed national level [forest] governance’ and, in ‘strengthening the underlying forest audit process’ actually ‘benefited certification’.

Claims that FLEGT ‘lacked chain of custody’ and that this was a weakness relative to certification, were also misleading, said Mr Beeko. In fact, traceability and monitoring were inherent in FLEGT. “Generally, the gap between operation of FLEGT and certification is very small,” he said.

To improve market understanding, he reported, forest and environmental advocacy organisation EcoCare Ghana had published a booklet ‘Communicating Ghana’s FLEGT-VPA Journey’, targeting EU policy makers, timber trade and consumers. “A FLEGT licence,” this states, “is more than just a piece of paper attesting to legality. It is a product of painstaking multi-stakeholder processes and technical systems development.”

Delegates were also given latest VPA news by Laurent Cerbonney of the EFI FLEGT facility from two other African countries at implementing stage, Cameroon and Republic of Congo (RoC).

The Cameroon Forestry Ministry was reported to have made progress in its VPA information transparency commitments, although there was ‘still more to do’. The country completed a stock take this year and is developing a new [VPA] roadmap for 2020-2026.

“A new forest code is in place and VPA legality definition revision is ongoing,” said Mr Cerbonney. Cameroon also had a strong tradition for stakeholder participation in forest monitoring and several multi-stakeholder structures were established. Priorities now include validation of the Cameroonian forest rules and [VPA] implementing decrees, establishment of a VPA monitoring structure and further improvements in transparency and stakeholder capacity building. 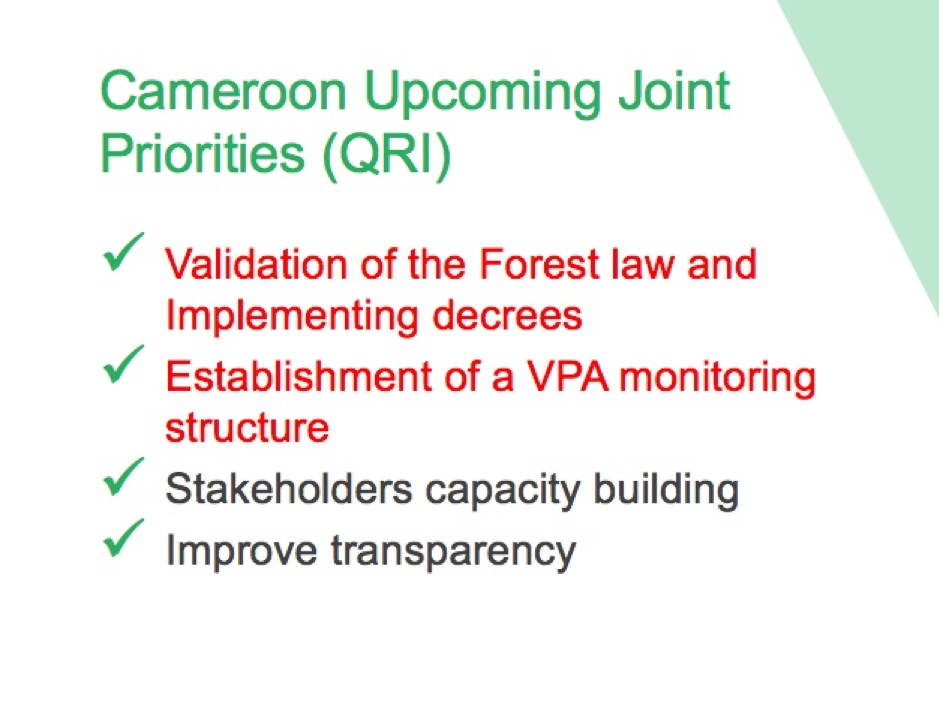 The RoC is two years into its latest five-year implementation plan. With its next VPA Joint Implementation Committee meeting due in November, it is now in the process of deploying the online legality verification system (SIVL) component of its TLAS. In terms of meeting VPA transparency obligations, the Forestry Ministry now publishes information on its website and a new forest code is due to be voted on soon, while implementing decree development is ‘pending’.

“An independent auditor also conducted seven audits from 2018-19 and the government is working on non-compliances,” said Mr Cerbonney, adding that the RoC also had a number of multi-stakeholder structures in place.

Next steps include national roll-out of the SIVL, legal framework and law enforcement improvements, legality grid revision and development of VPA impact monitoring. 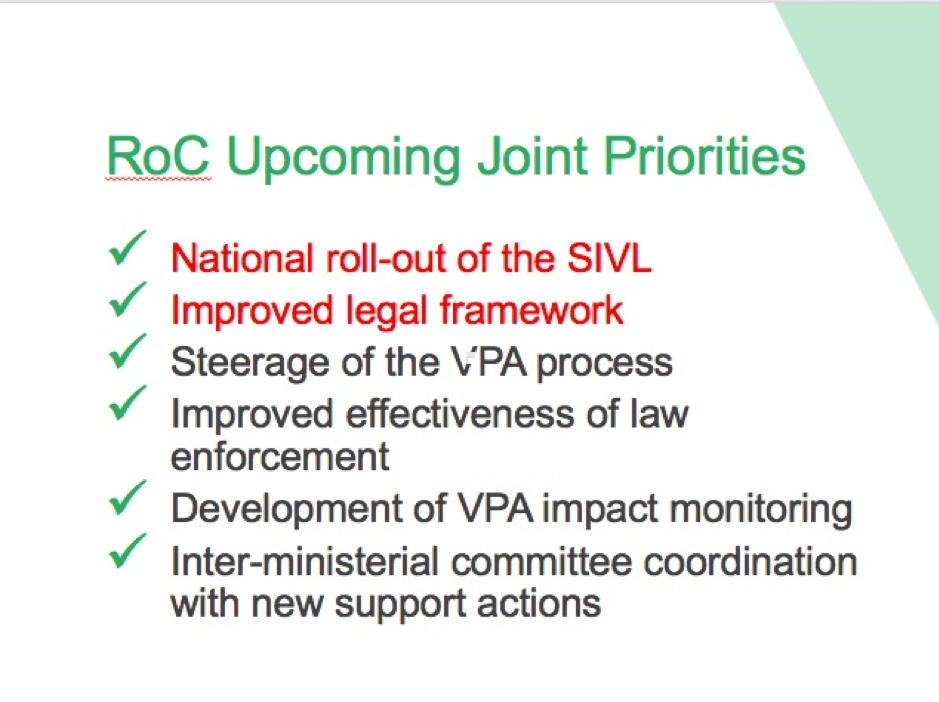 Challenges and imperatives for FLEGT in Africa

Pascal Chomont of Swiss-based Interholco, one of the biggest European forest product suppliers operating in Africa, described the environmental, social and economic benefits of legal and sustainable forest management. Its IFO subsidiary in RoC manages the biggest FSC-certified forest concession in the world, covering over 1m ha. It employs 1,000 people, while 16,000 live within its forest’s borders. It harvests one to two trees per ha on 30-year cycle, sets aside 300,000ha for biodiversity conservation and its ‘eco-guard’ force destroyed 72 poacher camps in 2016 alone.

He described initiatives like REDD+ and FLEGT as ‘important to the operating environment and business conduct’ in RoC. Until FLEGT licensing begins, he said, Interholco was having to ‘check everything itself to ensure EUTR compliance’. He also described evaluation of third-party suppliers in Africa as a ‘time-consuming, expensive’ process.

“We currently have to explain to producers the importance of transparency and to support improvement of their forest management,” said Mr Chomont. “This will all be much easier when FLEGT is implemented.” 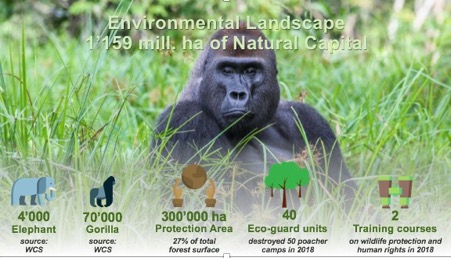 Pilot legality audits
IFO, he added, is actively involved in RoC’s FLEGT process and has taken part in pilot legality audits. “A national traceability system is not ready yet, but IFO has also been chosen as a test company to put a chain of custody in place.”

In the last decade, mirroring the experience of other African-based producers, Interholco’s sales to environmentally conscious countries of Europe and North America have declined, while those within Africa and to Asia, where ‘legality/sustainability is not a real issue’, have grown. “This does not motivate further investment into sustainable forest management,” said Mr Chomont. “Environmentally conscious countries are wary of tropical wood, which is why it is important FLEGT is implemented as soon as possible. It is also up to importers to convey a positive image of African tropical timber and to continue to offer it.”

Delegates asked speakers for more on the time frame for Cameroon and RoC VPA implementation and also said that it remained difficult to obtain documentation required for EUTR due diligence from Cameroon suppliers.

Mr Cerbonney pointed out that both countries’ VPAs required ‘a lot of change’ in their forest and timber industries, which inevitably took time. But he reiterated that RoC’s SIVL legality verification system was close to implementation and also that development of application software for Cameroon’s TLAS is scheduled to be a beneficiary of the “PAMFOR” forest and governance funding agreement between it and the EU. These could both potentially support EUTR due diligence information provision, as could the VPA process overall as it progressed.

At the same time, Mr Chomont said it was still important in the due diligence process for EU operators to visit African suppliers and evaluate their procedures on the ground.

There was also backing from delegates for more cooperation and alignment in Africa and elsewhere between FLEGT and certification. “The two need to develop hand in hand,” said one.

Mr Cerbonney agreed they were complementary. “FLEGT makes sure everyone follows the law, providing a good basis for certification”, he said.

Mr Chomont felt that FLEGT and private certification could and should be ‘mutually reinforcing’. “It might take time to achieve this, but if we don’t act soon interest in doing so will decline,” he said.

Mr Beeko also stressed that FLEGT’s social, environmental and economic benefits gave it ‘strong elements of sustainability [assurance]’. “The market still has stoo narrow a perception of FLEGT,” he said. “We need to highlight these other aspects more strongly – that sustainability components are embedded within it.”