In 2017, the IMM EU trade survey had asked respondents to rate the competitiveness of VPA-implementing and FLEGT-licensing countries using a variety of indictors such as product range, quality, lead times and price. Results can be found in section 4 of the IMM 2017 Annual Report. This exercise was not repeated in 2018, as no major changes were expected to have occurred over such a limited period of time. The rating will be repeated and extended as a part of the 2019 survey.

Instead of looking directly at indicators of competitiveness, the 2018 survey contained questions referring to the ease of obtaining information to satisfy EUTR due diligence requirements in VPA partner countries compared to several other important (tropical) timber supplier countries. The survey also asked respondents to indicate in which VPA implementing countries FLEGT-licensing would be particularly important to them. And thirdly the survey asked respondents to assess which countries would likely be the most important suppliers of tropical timber to the EU markets five years from now.

Chart 1: In which countries would FLEGT-licensing be particularly important? 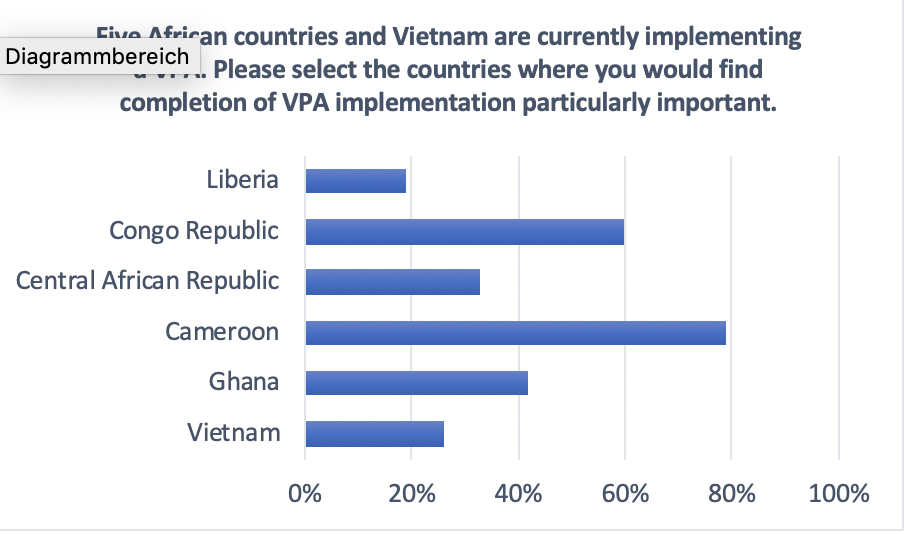 The survey question on relevance of the VPA implementing countries for EU markets (Chart 1) has its limitations, especially where Vietnam is concerned. Vietnam supplies primarily furniture to the EU markets, and furniture traders were not strongly represented in the general 2018 IMM trade survey as they had been typically contacted separately, for the IMM furniture sector scoping study.

Where the African tropical timber supply countries are concerned, survey respondents were hoping for FLEGT-licensed timber to become available in Cameroon and Congo Republic, in particular. More than 40% of respondents also said that they would find the start of FLEGT-licensing in Ghana particularly important.

Cameroon was also believed to be the most important tropical timber supplier for the EU markets five years from now (chart 2), followed by Brazil, Congo Republic, Malaysia, Indonesia and Gabon. The low rating of Vietnam can again be explained by the lack of furniture sector sources. 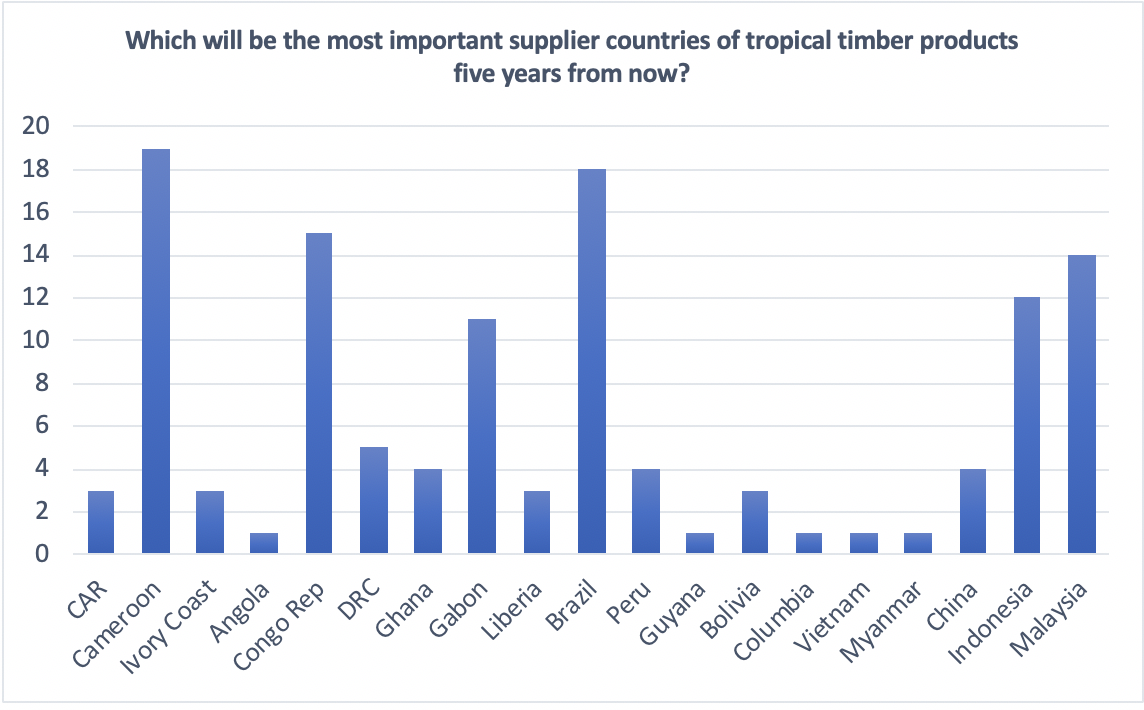 A number of respondents believed they will be facing increasing difficulties securing tropical timber supplies. Strong and still growing competition for resources from China and other Asian countries, demographic trends and the related expected rise in domestic timber consumption especially in the African supply countries, as well as Europeans having become “annoying customers” due to EUTR requirements were quotes as main reasons.

In addition, limitations in infrastructure development as well as political instability and conflict were mentioned as factors impacting tropical timber supply, especially from the African countries. Some respondents mentioned an increasing focus on South American suppliers, including in Bolivia, Peru, Guyana and Columbia – besides Brazil. Indonesia and Malaysia were commonly expected to remain important sources of supply.

In order to establish how challenging it is for European buyers to source (tropical) timber from both VPA partner countries and several other important supplier countries, the 2018 survey asked respondents about their experience with obtaining relevant information for proving negligible risk of illegality in those countries. Russia was included in the rating as Russian birch plywood was frequently cited as a substitute for tropical plywood products in the 2017 survey.

Where the African VPA partner countries are concerned, Gabon was found to be the country where correspondents could most easily obtain information indicating compliance with the EUTR, followed by Cameroon and Ghana (Chart 3). Liberia and Central African Republic were perceived as most difficult. 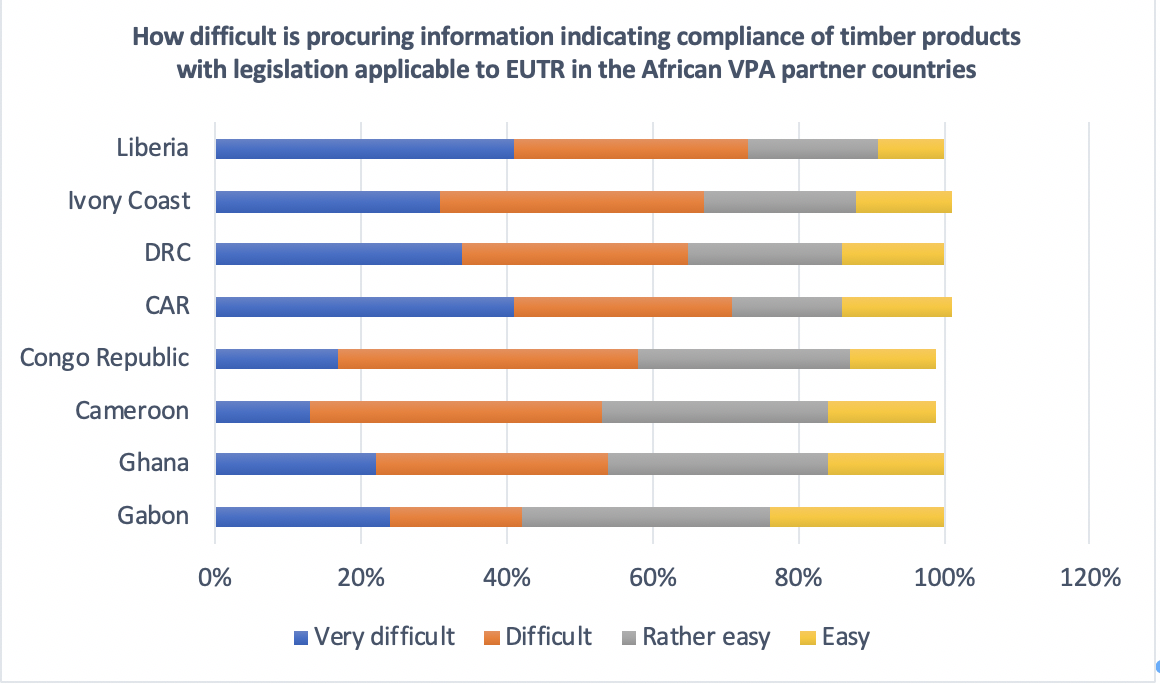 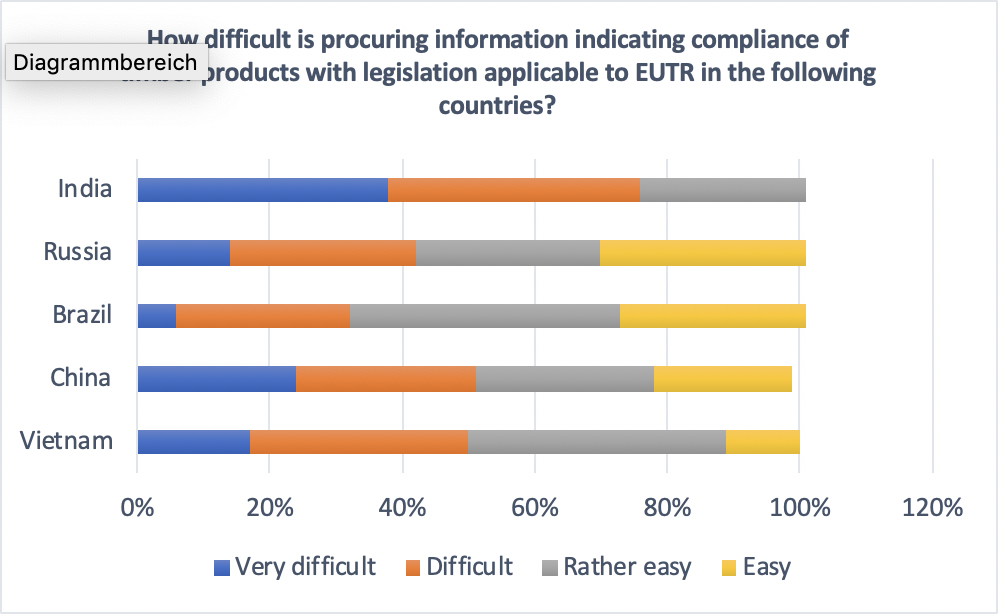 By way of comparison, respondents were asked the same question with reference to Vietnam, Brazil, China, India and Russia (Chart 4). India turned out to be the most challenging supplier, according to survey respondents, with reliable proof of legality even more complicated to obtain than in Liberia or Central African Republic. This is particularly interesting, as European timber imports from India, especially of wood furniture, have increased quite rapidly over the last two years.

Brazil, Russia and China were perceived to be less challenging and Vietnam was placed roughly at the same level as Gabon, when it comes to obtaining proof of legality.