As a part of the IMM 2018 and 2019 EU trade surveys, respondents were asked whether FLEGT-licensing and the introduction of the EUTR had had any direct impact on the share of tropical timber in their overall timber imports[1]. As demonstrated in chart 1, contrasting impacts were identified for FLEGT-licensing and EUTR.

35% of respondents in 2018 and 38% in 2019 reported either small or big decreases in the share of tropical timber in their overall timber imports due to introduction of EUTR. Survey respondents indicated that EUTR due diligence had narrowed their supply base in tropical countries, in particular in Africa. An increasing concentration of tropical timber and timber product import trade in the hands of “specialist” exporters and importers was also noted. Respondents also indicated that EUTR had caused the sector to reconsider its supply chain relationships, which had frequently resulted in increasing substitution of tropical hardwoods with alternatives, including temperate hardwoods, chemically or thermally modified timber or non-wood substitutes.

Chart 1: Impact of EUTR and FLEGT-licensing on tropical timber imports 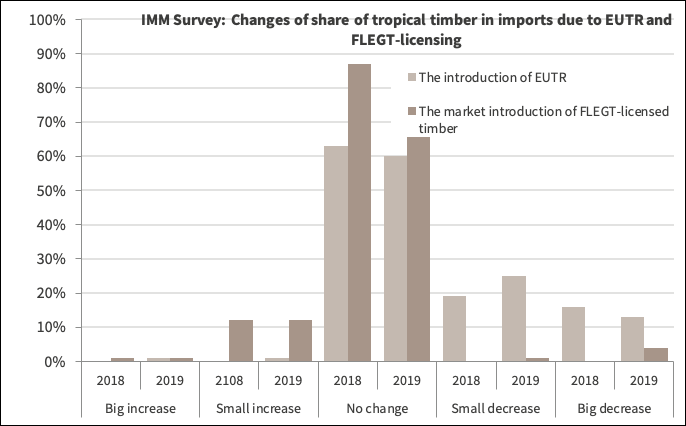 Roughly 60% in both years said there was no impact due to the introduction of the Regulation. Companies that did no note any impact of EUTR on their imports of tropical timber and timber products mostly stated that they had had due diligence processes in place before the introduction of EUTR and thus felt they and their suppliers were already fully compliant when the Regulation entered into force.

The 2018 and 2019 surveys also questioned whether there were any direct impacts from the introduction of FLEGT-licensing and the EUTR on imports of timber certified by private certification and legality verification schemes. Chart 2 shows that private schemes, especially FSC, profited from the introduction of EUTR. A number of survey respondents remarked that they preferred buying certified timber since the EUTR came into force and have used certification as a means of compliance with EUTR due diligence requirements since.

However, capacity constraints for certified tropical timber, as already reported by IMM in 2018, persisted also in 2019, against the background of no further progress in forest certification in tropical countries. As a result, the stronger focus on certified products, both to support EUTR compliance and to achieve goals set by company procurement policies, has further intensified substitution of tropical timber products with alternatives made of temperate wood, which are much more readily available with FSC or PEFC certification.

In addition to FSC and PEFC, respondents said they had been increasingly looking to other private legality verification schemes to ensure EUTR compliance. 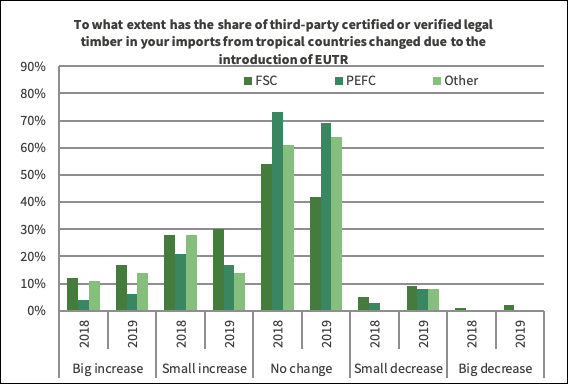 When asked whether the market introduction of FLEGT-licensed timber from Indonesia had had any impact on their purchases of certified timber (chart 3), the majority of companies answered “no change”. A smaller number or respondents – between 1 and 5% depending on the year and certification scheme – reported decreases. 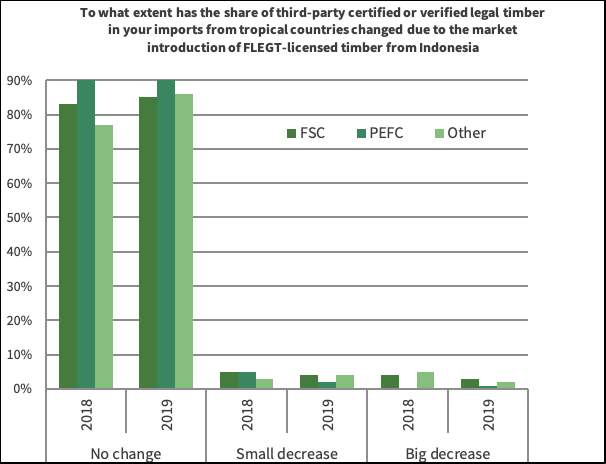 [1] It was not the aim of the EU Timber Regulation to promote or reduce imports of certain types of timber or timber products. However, market players report impacts as a side effect. https://www.flegtimm.eu/index.php/newsletter/imm-surveys-interviews/109-imm-survey-substitution-economic-crisis-and-diversion-of-supply-main-drivers-of-eu-timber-market-decline