The IMM 2018 EU trade survey asked respondents whether FLEGT-licensing and the introduction of the EUTR had had any direct impact on the share of tropical timber in their overall timber imports. Chart 1 shows that the majority of respondents found that the share had not been directly affected by either.

However, where EUTR is concerned, the proportion of companies saying the share of tropical timber in their imports had decreased slightly (19%) or even substantially (16%) because of its introduction was quite significant. As a result, IMM decided to include the EUTR in future ratings of “drivers of decline” and “opportunities for growth” in the EU tropical timber market.

2% of respondents stated that the share of tropical timber in their imports had increased due to EUTR. This can be explained with a shift in the market, as a part of which smaller importers gave up direct purchases in tropical countries in supply countries due to legality risks involved. These companies are now buying tropical timber from larger importers in the EU, which in turn were likely able to increase their sales and, as a result, also imported more.

The market introduction of FLEGT-licensed timber had no negative impact on importers’ tropical timber procurement, according to survey respondents. 12% of respondents reported a small increase in share and 1% a big increase.

Chart 1: Impact of EUTR and FLEGT-licensing on tropical timber imports

Certification schemes have profited from EUTR

The 2018 survey also analysed whether there were any direct impacts from the introduction of FLEGT-licensing and the EUTR on imports of timber certified by private sustainability certification and legality verification schemes.

Chart 2 shows that private schemes, especially FSC, have profited from the introduction of EUTR. A number of survey respondents remarked that they tended to prefer buying certified timber since the EUTR came into force and have used certification as a means of compliance with EUTR due diligence requirements since. This effect was particularly pronounced in markets where (FSC) certification of tropical timber products reportedly has a lower level of market penetration than in the Netherlands and the UK, where demand for certified products is strongest, according to survey respondents. Several traders in Germany, France and Italy, for example, reported “big increases” in FSC certified timber purchases due to the introduction of EUTR, but none in the Netherlands or the UK. Small increases were noted in all countries. The lowest overall level of growth was reported by the Netherlands, where only two respondents reported “small increases” due to EUTR.

However, when trying to source (additional) certified timber, a number of companies were reportedly facing supply restrictions, especially in African countries. The decision in quick succession of several European tropical hardwood specialists to offload some of their African operations, including forest concessions, suggested to some respondents that the “old model” of European companies supplying certified hardwood to environmentally sensitive European markets is breaking down in the face of failure to secure a premium for the product and intensifying competition for timber from markets operating to limited environmental constraints, notably China.

In addition to FSC and, where available PEFC certification, respondents said they had been increasingly looking to other private legality verification schemes managed for example by Rain Forest Alliance, Nepcon or Bureau Veritas, to ensure EUTR compliance. 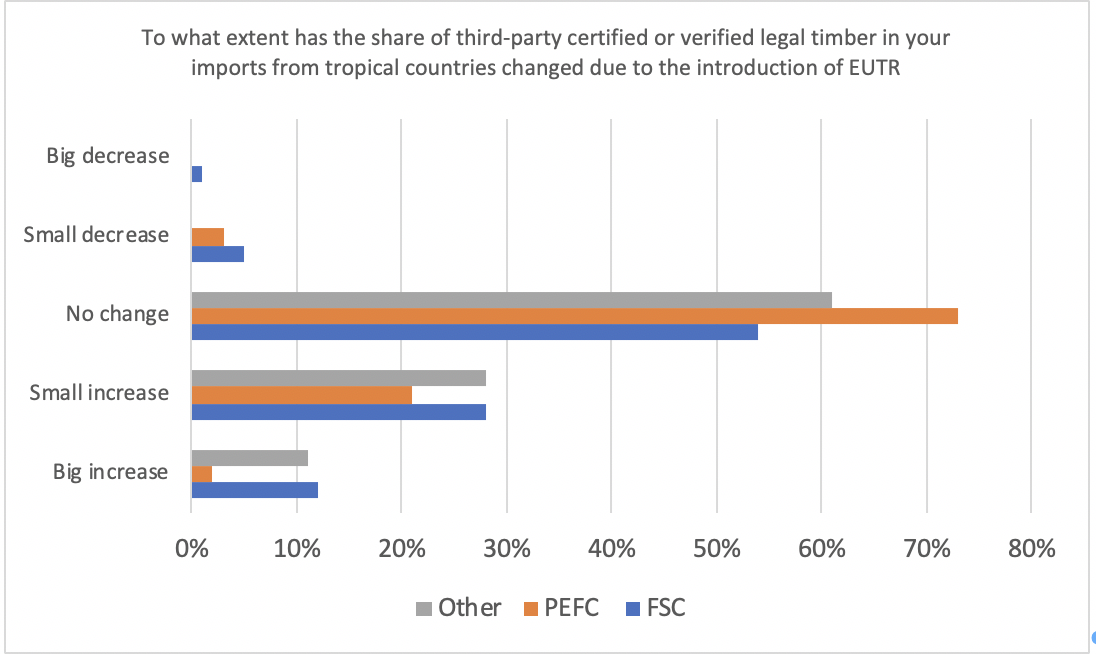 When asked whether the market introduction of FLEGT-licensed timber from Indonesia had had any impact on their purchases of certified timber the overwhelming majority of companies answered “no change”. A small proportion of respondents noticed small (5%, FSC) or big (4% FSC, 5% PEFC, 3% other) decreases (chart 12). This picture may change once a larger number of countries, especially also in Africa, offers FLEGT-licensed timber. 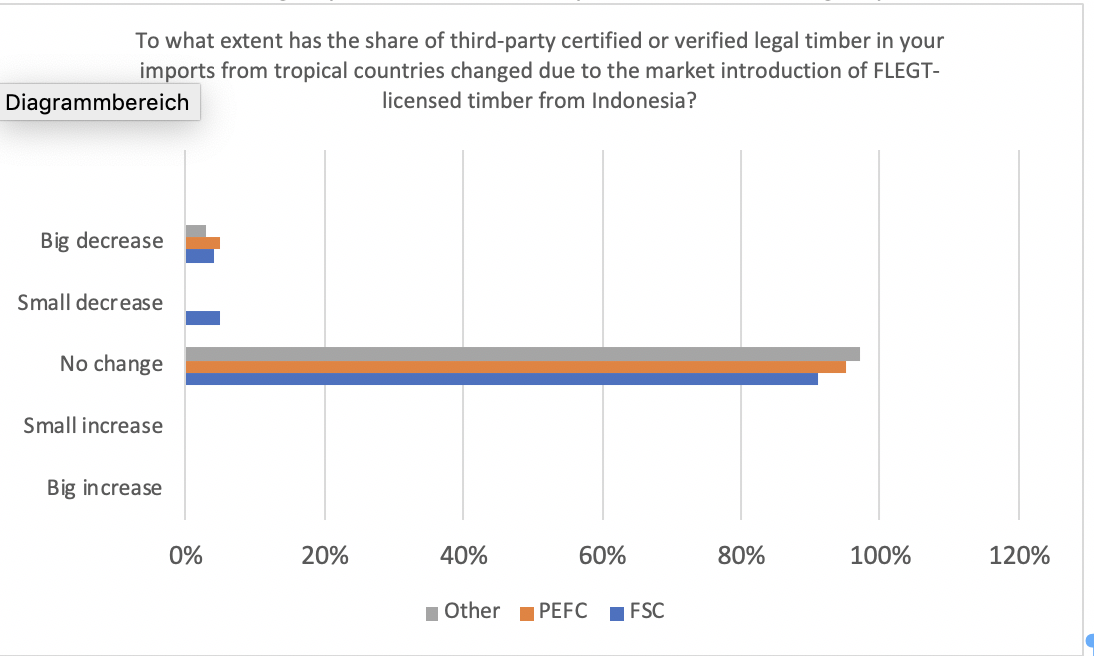