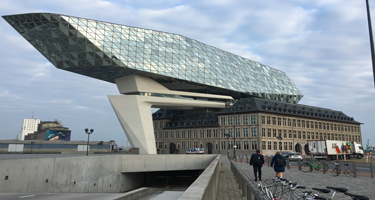 There could not have been a more appropriate venue for the latest IMM FLEGT Trade Consultation than Antwerp. The city is one of the world’s great ports and a leading distribution hub for timber, sourced worldwide, for Belgium, the rest of Europe and beyond. Alongside Tilbury in London, Antwerp was also the reception point for the first FLEGT-licensed shipments from Indonesia.

The IMM Benelux Trade Consultation was held at the port itself in the new Port House, a former fire station, spectacularly remodelled by world-renowned architect Zaha Hadid, with a glass and steel extension raised above the old building on massive pillars.

An audience of 50 from the Benelux countries, across Europe and Indonesia attended the event, which was co-organised with Belgian and Dutch trade federations Fedustria and the VVNH.  Delegates included timber importers and distributors, end-users, retailers and representatives from trade associations, EU Timber Regulation and FLEGT competent authorities (CAs) and government agencies.

But most of the day was dedicated to audience participation. Workshops on tropical trade trends, the FLEGT initiative’s role in purchase dynamics, its sustainability credentials and the trade-shaping influence of public and private sector procurement policy triggered wide-ranging discussions. The open forum approach was also intended to further inform the work of the IMM itself in analysing market drivers and market impacts and perceptions of FLEGT. 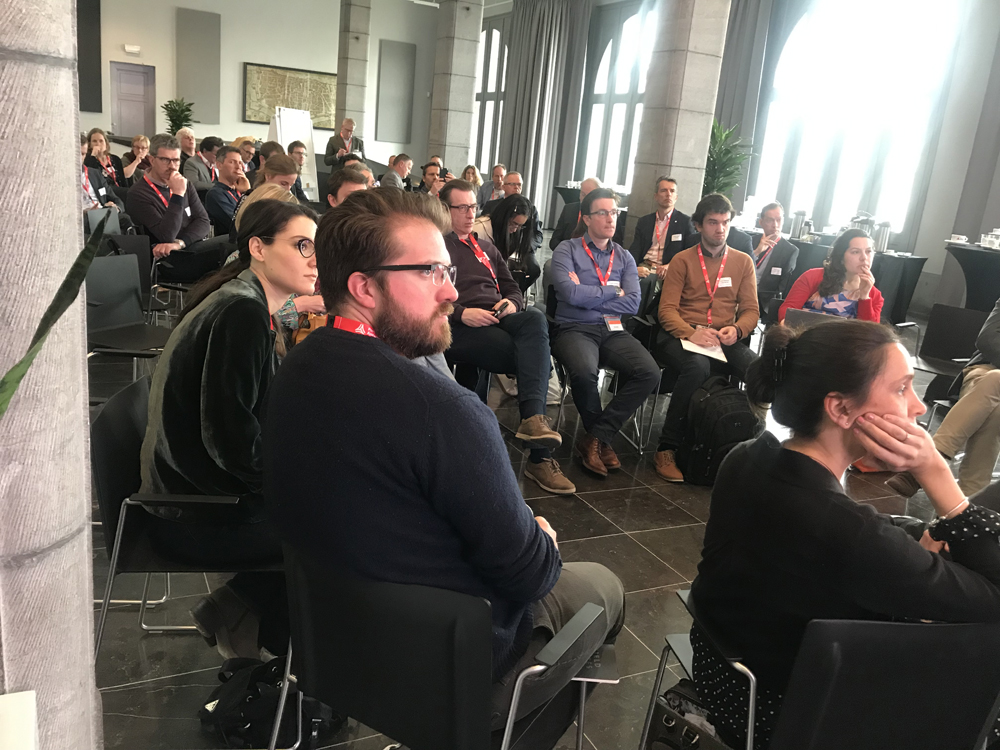 IMM Lead Consultant Sarah Storck stressed the value to the IMM of having such a large, diverse audience and encouraged delegates to share views both positive and negative on market trends and prospects generally and evolution of the EU FLEGT initiative in particular. “The IMM has no mandate to promote FLEGT-licensed timber,” she said. “Our role is to monitor and report objectively on its development, so we want your honest opinions.”

Reviewing the IMM’s recent market analysis, Ms Storck said its latest trade survey showed the EU timber sector becoming quickly accustomed to the FLEGT licensing system. “In 2017 a not insignificant percentage of respondents had said it was more complex than undertaking due diligence under the EUTR. But in the 2018 survey only 1% of respondents still felt that, whereas the vast majority said it made importing easier”.

Commenting on the direct impacts of FLEGT-licensing and the EUTR on EU tropical timber imports, she said that the market introduction of FLEGT-licensed timber was felt to have had a small positive impact by EU trade respondents to the 2018 IMM survey. At the same time, roughly one-third maintained that the EUTR had negatively impacted tropical timber imports. Nonetheless, trade representatives interviewed by IMM emphasised that they were supportive of the EUTR and saw it as an opportunity for the tropical timber trade in the medium and long-term – as long as it was effectively implemented.

This attitude is also reflected in the results of Workshop 1 in Antwerp.

IMM Trade Analyst Rupert Oliver summarised recent development of the wider tropical timber trade, looking particularly at the diminishing role of Europe as a market player. While global tropical timber sales had fluctuated in the last 15 years, the underlying trend had been upwards, he said.

Within that, North American timber and wood products imports from tropical countries had grown, principally due to offshoring of American furniture manufacturing to Asia. Japanese imports had been declining, but were also now rising again, notably in tertiary products.

But the principal factor shaping trade has been the huge and still growing tropical timber consumption of China, while Europe has seen its share of global trade shrink from 36% to just over 20%.

“Chinese market dominance has not just shaped trade flows, but also development of the tropical wood industry,” said Mr Oliver. “For instance, Africa had been expected to move into exports of value-added wood products a decade ago. That has not happened due to Chinese demand for logs and lumber.”

“A focus of IMM research is whether the declining trend in EU tropical timber consumption can be changed and especially where FLEGT might sit in development of EU tropical timber trade,” he said. “Can it be a platform to rebuild market share?”

Underlining its potential market influence, he added, while EU tropical timber imports from non-FLEGT VPA countries, notably Brazil, India and China, had increased to around 25%, the remainder was FLEGT-licensed or from VPA-engaged suppliers. The two lead providers were Indonesia and Vietnam, with 15% of EU imports from Malaysia, Thailand and Laos, and 10% from African VPA countries.

“Vietnam is of particular interest, said Mr Oliver. “It’s been increasing global timber exports by around $1 billion a year. As and when it fully implements its VPA, it has potential to significantly increase the volume and variety of FLEGT-licensed timber and wood products available.”

Meriam Wortel of Netherlands CA, the NVWA, said that part of its role had been to monitor volume trends in Indonesian forest product imports since the start of FLEGT licensing. “While, pulp and paper trade is more prone to fluctuation, the overall direction has been upwards, with latest figures for timber and wood furniture showing further rises,” she said.  “However, while we can say licensing has had no negative effects, it is not yet clear to what degree or if FLEGT licensing is a factor in this positive trade trend.” 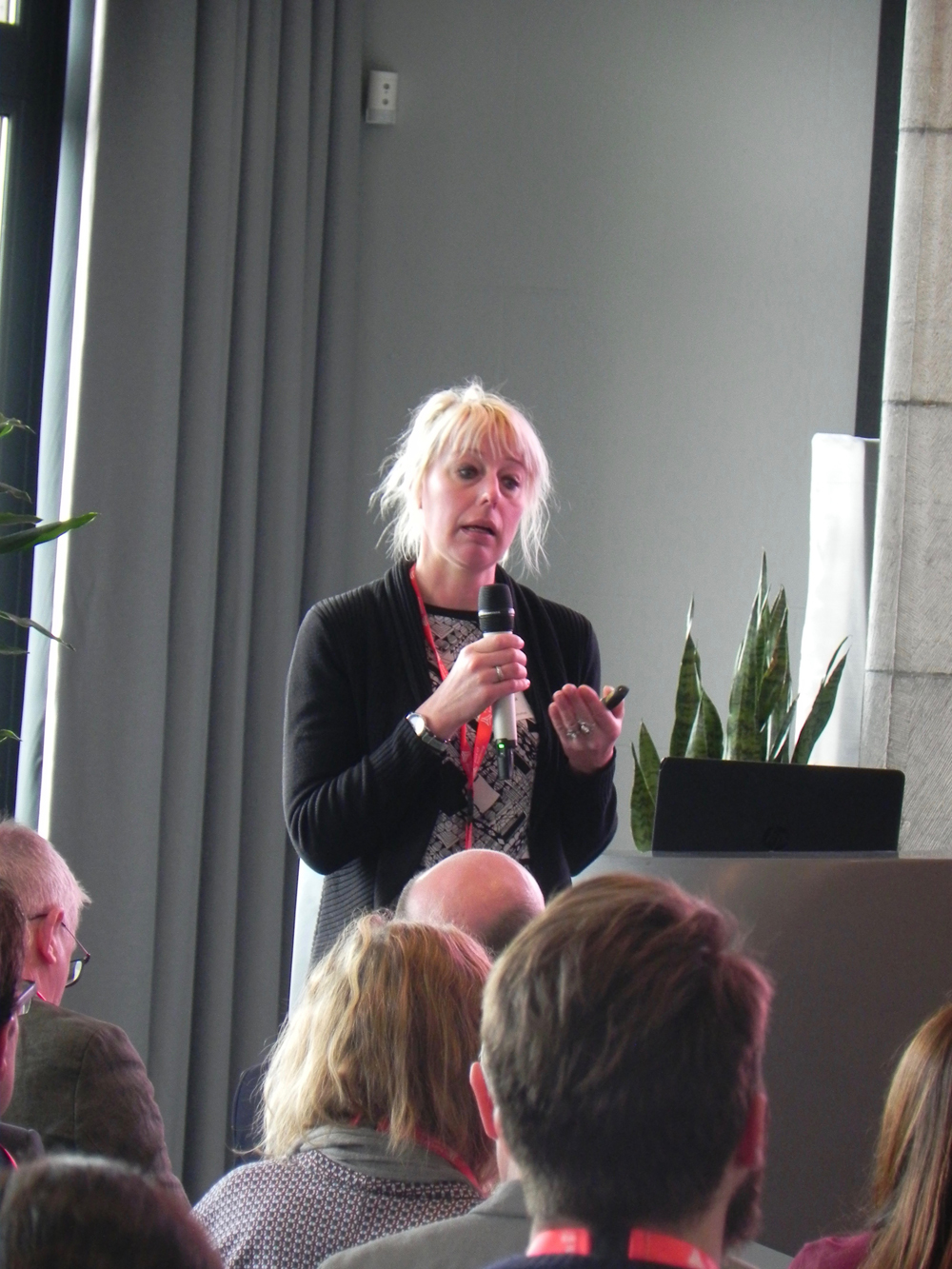 The NVWA is processing more FLEGT licences than any other CA, a total last year of 8546. The Dutch CA is also one of the driving forces behind developing a fully electronic FLEGT-licensing system in cooperation with Indonesia and the EC.

Initial administrative teething problems dealing with licences had been overcome as the trade grew accustomed to the process, said Ms Wortel. However, an ongoing issue was mismatches between HS codes on licences and those applied in the Netherlands. “We’ve raised this with the Indonesian authorities and liaised with other CAs, but, while the incidence of mismatches decreased last year, it has recently risen again,” she said. “So, there’s continuing need to stress to exporters they must get licence details right.”

During the subsequent discussion, participants highlighted that perceived “mismatches” were sometimes not due to mistakes on the FLEGT-licenses or importers’ documentation but to limited product knowledge and mistranslations on the part of customs’ officials. “Laminated” joinery products, for example, would sometimes be expected by customs officials to be “film-faced”. One or two participants complained that sorting out such issues and getting customs authorities to accept that the mistake was in fact their own would sometimes involve lengthy negotiations.

Ms Wortel added that the NVWA anticipated fewer mismatch issues with imports from Ghana when it starts licensing due to its less complex product mix and the different system of applying for and issuing FLEGT-licenses. She also said that the goal was that the process of FLEGT-licensing in Ghana should be fully electronical right from the start.

Picking up on some of the themes of the opening presentations, the Consultation’s first workshops, covered in detail below,  took the topics of Trends in the European tropical timber sector  – background, reasons and solutions, and Recognising priorities and purchase dynamics for tropical wood products – development of supply chain relationships and the relevance or impact of FLEGT licensing.

Leading into the final workshop on FLEGT and sustainability and its recognition in procurement policy, a speaker panel addressed related opportunities and challenges.