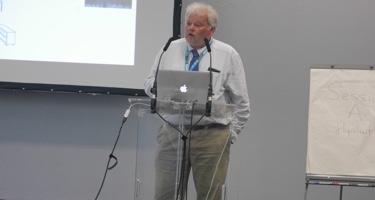 With further support, development and communication FLEGT and FLEGT licensing can play a role in underpinning tropical timber product market share in the highly competitive European furniture sector, according to the latest IMM survey.The core aim of the IMM scoping study of procurement in the EU furniture industry is to gauge the sector’s perceptions of the value, impacts and process of sourcing from FLEGT VPA engaged supplier countries.

The report was authored by consultant George White, based on individual country surveys undertaken by the IMM’s network of correspondents in seven lead importing countries. These were the Netherlands, UK, Germany, France, Italy, Spain and Belgium, which between them account for 83% of all furniture imported into the EU from VPA suppliers.

The key rationale of the survey is that assembled wood furniture consistently comprises 40% of the value of EU timber and wood products sourced from FLEGT VPA partner countries. So, canvassing furniture sector opinions of the VPA initiative and FLEGT licensing could hold valuable lessons for the development of EU market awareness and penetration of VPA-sourced and licensed products more generally. “[The aim is] to provide a preliminary assessment of the current and potential role of FLEGT licensing to improve market access for wood furniture from VPA countries in the EU, and to recommend a strategy to optimise the benefits of FLEGT licensing [in this respect],”  states the report.

The study was also designed to provide a comprehensive baseline of perceptions and impacts of the FLEGT VPA initiative in the wood furniture sector in order to generate recommendations for IMM’s long term monitoring of the industry.

The report recognises that VPA country furniture and furniture product suppliers face in the €36 billion EU furniture arena a ‘crowded and fiercely competitive market’.  The EU furniture industry comprises an estimated 130,000  companies, and 87% of wood furniture sold in the EU market is also made in Europe.

The basis of the survey comprised semi-structured interviews with 47 of these companies, representing the spectrum of business type, from very large retailers, to medium-sized manufacturers and distributors. Between them these  imported indoor and outdoor furniture, plus wood furniture components and raw materials. They had sourced from a combined total of nine of the 15 VPA-engaged countries and altogether dealt with over 800 individual foreign suppliers.

Indonesia, among the VPA countries, provided most trading relationships, followed by Vietnam and Malaysia. Of all overseas exporters to the EU, China came out in the lead in terms of numbers of respondents’ suppliers overall (480). That, stated the report, reflected the fact that, although its market share has slipped in recent years, China still provided 49.8% of all EU imports in 2017, valued at €2.1  billion.

Combined in 2016,  VPA countries accounted for 77% of tropical wood furniture imports into the EU in 2016,  a slight dip from 2013’s 79% due to a rise in imports from Brazil, India and the Philippines.  But, while the respondents had imported from a total of nine, the study also states, only four of the partner countries are actually engaged to any significant extent in the EU wood furniture market; Vietnam, Indonesia, Malaysia and Thailand. Of these, Indonesia was the most popular supplier, with 30 out of the 47 survey respondents sourcing from the country.None of the survey respondents imported furniture from African VPA suppliers.

Asked to rate all suppliers in terms of competitiveness across a range of criteria, including price, quality, product range and logistics, survey respondents placed EU manufacturers as most competitive, followed by non-EU Eastern European producers. Among other suppliers, Vietnam, China and Indonesia received highest ratings (Chart 1). 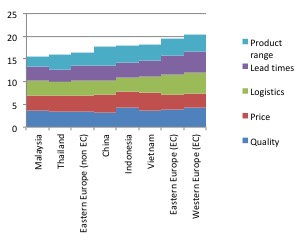 Of the 75% of respondents with some form of environmental procurement policy, the most common requirement was proven legality, or legal compliance (41%), followed by some form of [sustainability] certification (23%).  Just six companies (13% of respondents) had ‘policies that might be regarded as comprehensive’ (Chart 2). 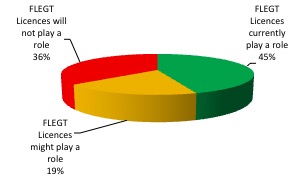 FLEGT-licensed products were valued by 45% of furniture companies (principally those sourcing from Indonesia), while 19% said licensing would influence their purchasing, if a wider range of licensed product were available from more supplier countries.

The main benefit of FLEGT-licensed products identified  was their exemption from further due diligence under the EU Timber Regulation (EUTR).  The view of key market influencers, the larger retailers, was that ‘generally a FLEGT licence makes compliance with the EUTR easier’. However, they added, it does not [wholly] satisfy their purchasing policies (nor will it in the future)”.

Invited to air their wider opinions on FLEGT, respondents’ positive views included that it ‘brings us added value by demonstrating the legality of the wood we use’ and ‘it will make our legality pledge all the more concrete’.

Among more qualified comments were that ‘it would play a role if there were not just one country supplying FLEGT products’ and  ‘licensing should be applied to all imports from all supplier countries to the EU, so that we and our suppliers are all on a level playing field and competing fairly’.

The negatives included ‘FLEGT only demonstrates legality – what adds value is the certification that resources are sustainably managed’ and  ‘there is no real impact for our customers’.

Asked for their view on the future of tropical wood in the European furniture market, 97% said it would still play some form of role in 10 years’ time. But opinion was evenly balanced on whether that role would remain stable, grow or decline.

Among recommendations for the FLEGT initiative going forward based on survey responses were that:

The broader conclusion of the report was that ‘licensed timber alone will not reverse the trends that are [negatively] impacting on tropical wood in Europe’.  However, it does have value and a role to play here, ‘as a tool to be utilised to form part of the process of building confidence in tropical timber in a wider [strategy] that might help maintain market share’. This strategy, it says, would also require a wider range of players’ involvement, including ‘major retailers, trade associations, national governments, NGOs, architects, and other opinion formers’.

Wood furniture market perceptions of FLEGT licensing, the survey concludes, are that it ‘lacks the glamour of third party SFM certification where sustainability is the main focus’ so has no consumer-facing role. At the same time its findings show that it can offer ‘assurance to business-to-business buyers operating at the base level of responsible purchasing’.