The 2020 study was acting on recommendations from a baseline study published in 2019, which had included all VPA implementing countries. This study had concluded that further monitoring of correlations between the FLEGT VPA process and forest sector investment should be limited to countries with an operational FLEGT-licensing system, as in other countries the scope of reforms was considered insufficient to have any identifiable impact on forest sector investment.

Confirming research from the baseline study, the in-depth study identified no clear correlation yet between milestones in the Vietnamese VPA process and investment activity in the forest sector (Figure 1). Other economic reforms were identified as the driving force between the rise in investment between 2010 and 2018. In 2010, for example, the country became partner of the Transpacific Partnership (TPP) and in 2011 the government enforced a series of resolutions which helped to stabilise the currency, curb inflation and improve the investment enabling environment.

However, a stakeholder survey included in the investment study identified high expectations among Vietnamese companies that the VPA, once fully implemented, would mitigate market risk, enhance capital mobilization and sector governance and thus improve the investment enabling environment. 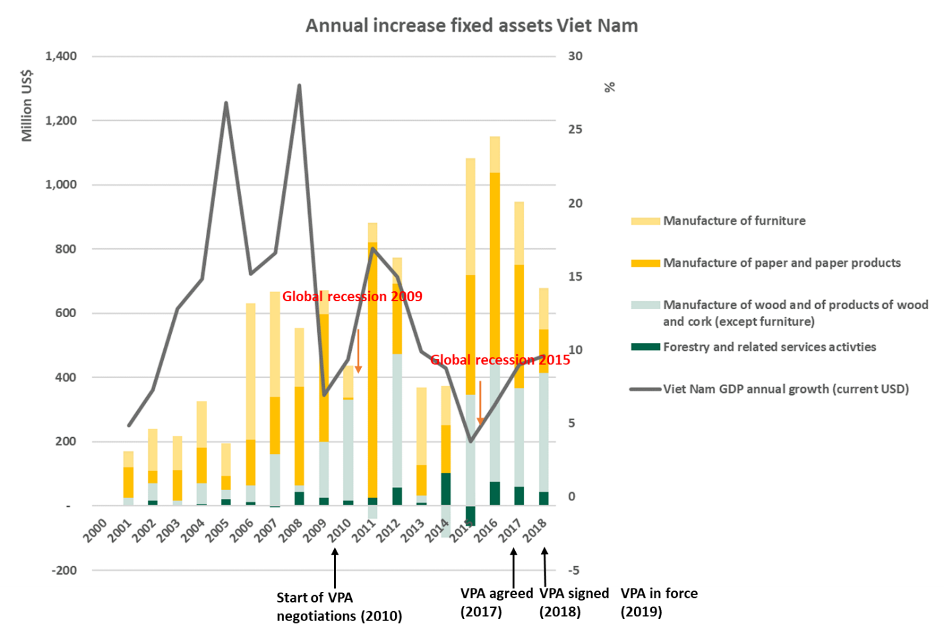 In Indonesia, by contrast, where the VPA has been operational and FLEGT licenses issued since late 2016, the study did suggest a direct link between the VPA and forest sector investment, although other factors were also important (Figure 2). The long-term trend for Indonesia shows increasing investment volumes in the forests sector with growing investment shares in wood industry and furniture since 2010.

The average annual forest sector investment in Indonesia in the pre-VPA negotiation period (1998 to 2006) was US$1.7 billion. This almost doubled since start of the VPA process in 2007 to US$3.1bn/year. Stakeholder and enterprise interviews suggest that increasing investments in the wood industry and furniture during that period were partly triggered by the VPA process, which was improving forest sector governance and Indonesian market access in the EU, the US, Australia and other regulated markets. However, defining and quantifying the exact impact of the FLEGT VPA process on forest sector investments in Indonesia remains difficult. 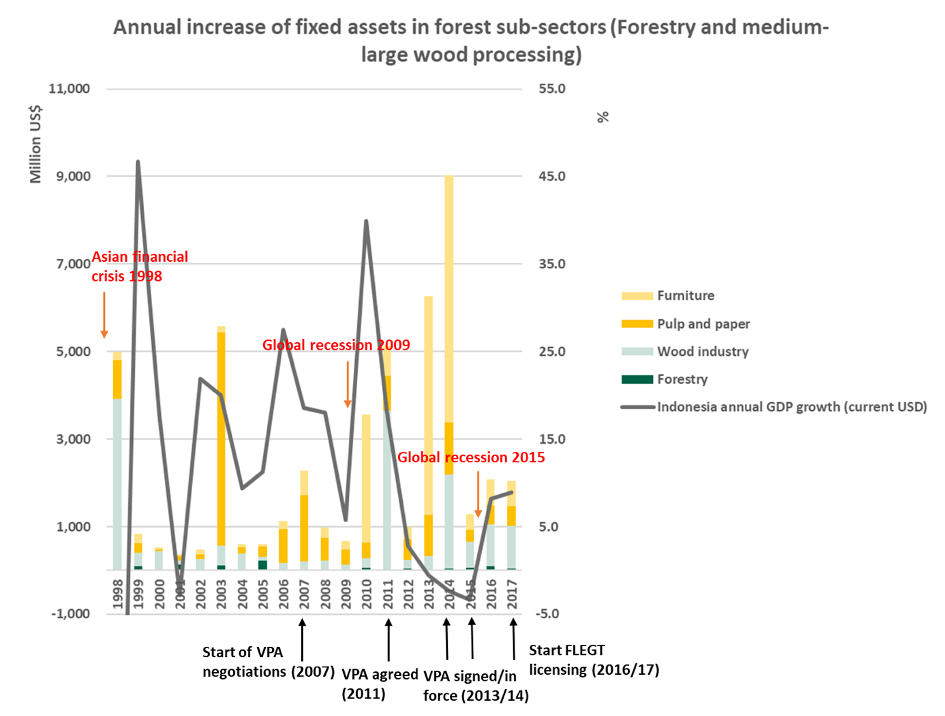 The 2019 baseline study demonstrated that a FLEGT VPA alone cannot compensate for the lack of market drivers for investments such as market potential, investment friendly environment, efficient production systems and favourable cost situations, for example. However, in countries where all or some of the above criteria are met, as is the case in Viet Nam and Indonesia, VPAs can be a stimulating factor in the investment-enabling environment in the forest sector by:

To further strengthen the positive impacts of VPAs on forest sector investment, the following aspects should be considered:

The full investment study will be published on the IMM website in January 2021.