In IMM’s 2019 EU trade survey, Indonesia had overtaken Cameroon in the question which country respondents would consider the most important supplier of tropical timber five years from now (Figure 1). Cameroon regained some ground in 2020, staying ahead of Malaysia in the three-year average, but still came out second again at some distance behind Indonesia.

Respondents’ attitudes to Indonesia have changed significantly since 2019, with the country obtaining the most individual votes by far and overtaking all four countries that had been considered potentially more important in 2018 (Cameroon, Brazil, Malaysia and Congo Republic).

Indonesia again led the ranking again in 2020, with 45 out of the total of 293 votes (survey respondents were allowed multiple answers), followed by Malaysia (38 votes), Cameroon (36 votes) and Brazil (32 votes).

Viet Nam was ranked 9th most important potential supplier in 2020. However, Viet Nam is very likely underrepresented in the IMM survey, as most respondents are importers of HS44 wood products, rather than furniture from VPA partner countries. Moreover, while located in the tropics, a large proportion of timber products supplied by Viet Nam to Europe are not made of tropical timber and respondents may have taken this into account in the ranking.

India (3 votes) emerged for the first time as a potential key supplier in the 2020 survey. Over the last decade, Indian exports of wood products and especially furniture increased substantially to a number of countries in the EU27+UK including Germany, the Netherlands, the UK and France.

Brazil made a sharp recovery in 2020, after a drop to just 12 votes and 9th place in the ranking in 2019. However, according to survey respondents, doubts still persist regarding the political situation in Brazil and the implications for timber legality and EUTR due diligence, which would make finding suppliers more difficult.

Several other South American countries were mentioned as having potential to gain in importance as suppliers to Europe, including Peru (8 votes), Bolivia (3 votes) and Suriname (3 votes). Among the South American VPA partner countries Guyana (3 votes) was considered to have slightly more potential as a supplier than Honduras (1 vote) in 2020. 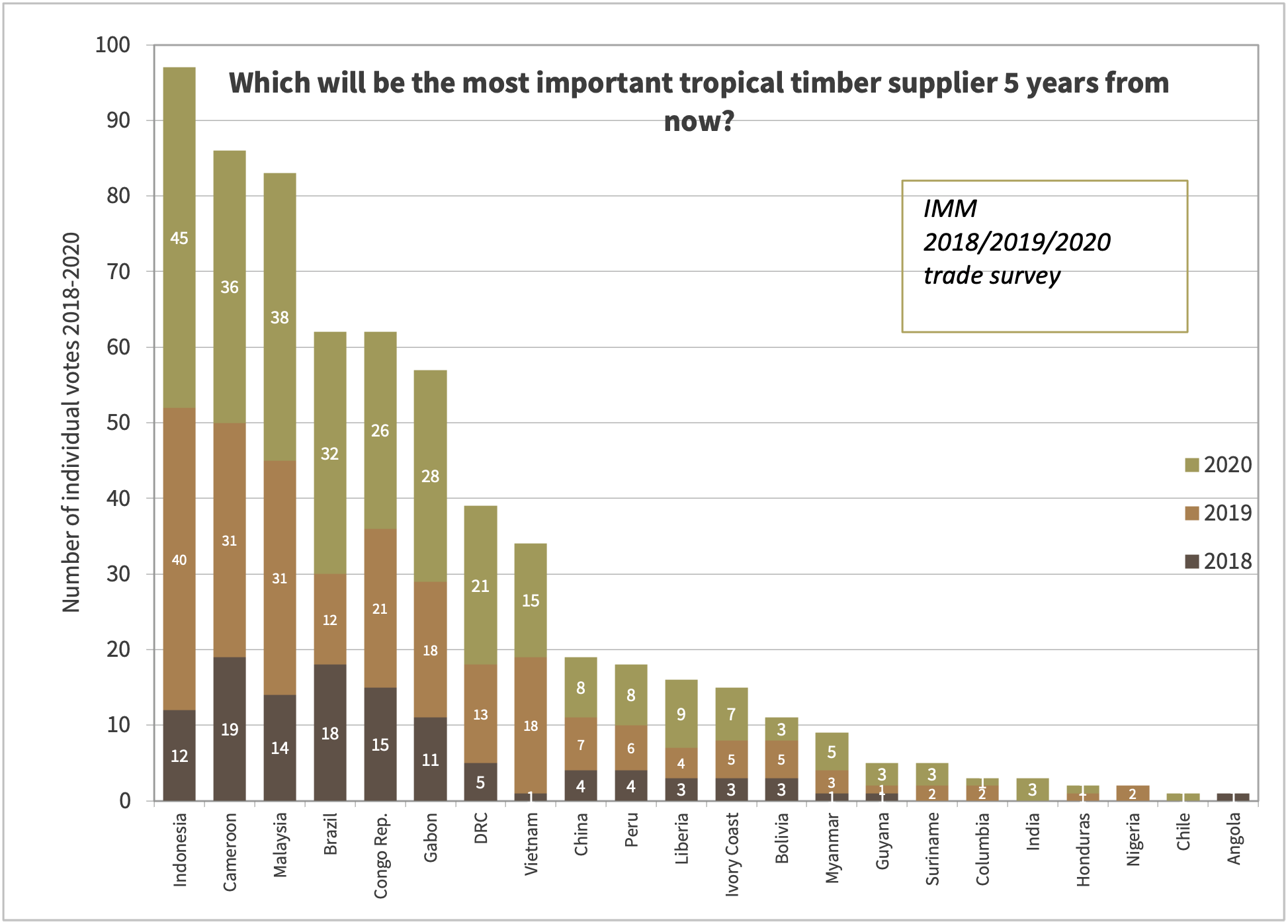