International competitiveness remains an issue for most VPA partner countries 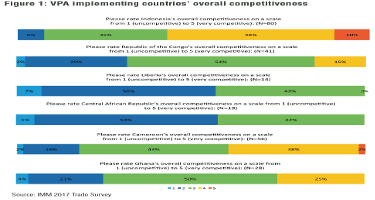 As a part of the IMM 2017 European trade survey respondents were quizzed about their own experience with VPA implementing partner country competitiveness. The questions included an inquiry into perceived overall competitiveness of each country as well as competitiveness against a range of indicators including:

As in the international indices, Indonesia was ranked the most competitive by far among the FLEGT-licensing and VPA-implementing countries also by the European trade. A number of respondents remarked it was “playing in a different league” than the African VPA implementing countries.

The African VPA partner countries achieved satisfactory and good ratings primarily in the areas of “product range” and “technical performance”; while supplying primarily sawn timber and some logs to the EU markets, the African VPA countries deliver several commercial wood species that can be found nowhere else in the world.

Ghana and Congo Republic were ranked “uncompetitive” or “very uncompetitive” by 26% and 31% of respondents, respectively, and around 50% gave a “satisfactory” rating in each case. Both countries also had a number of “good” ratings. 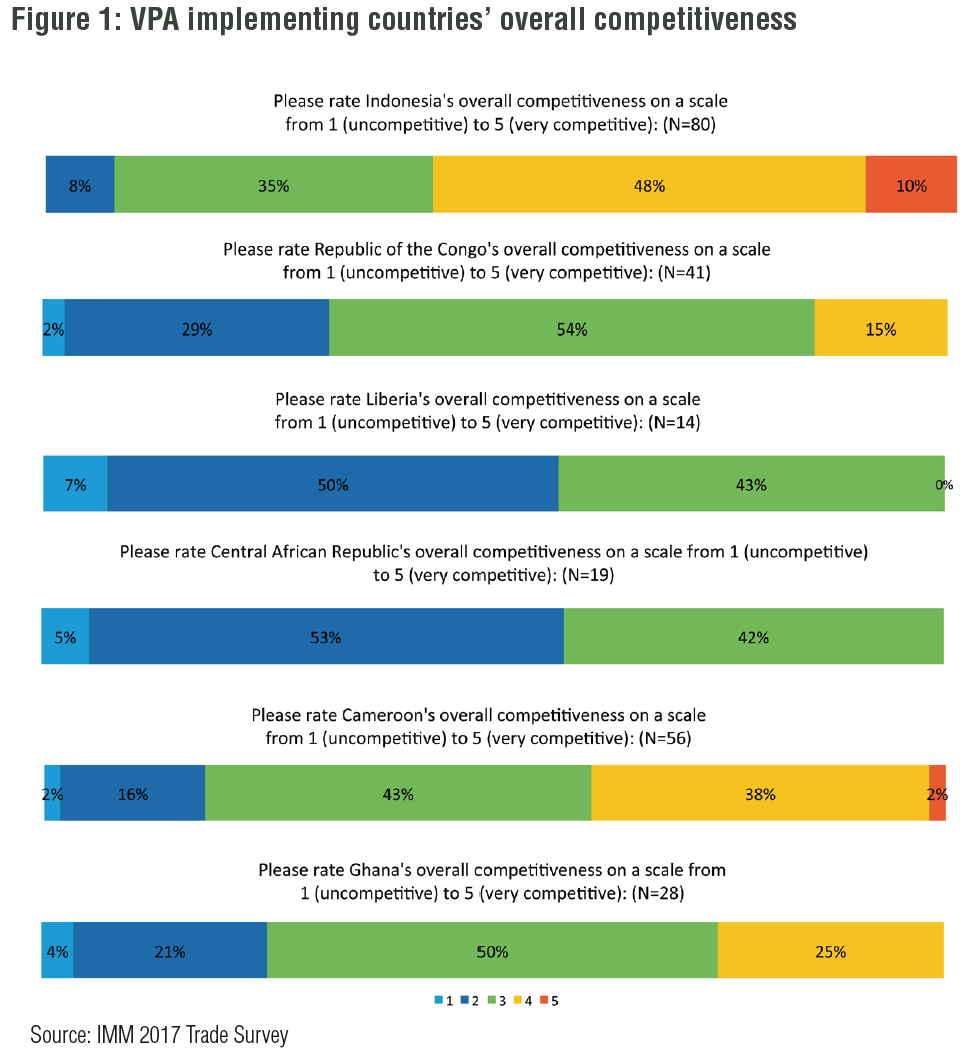 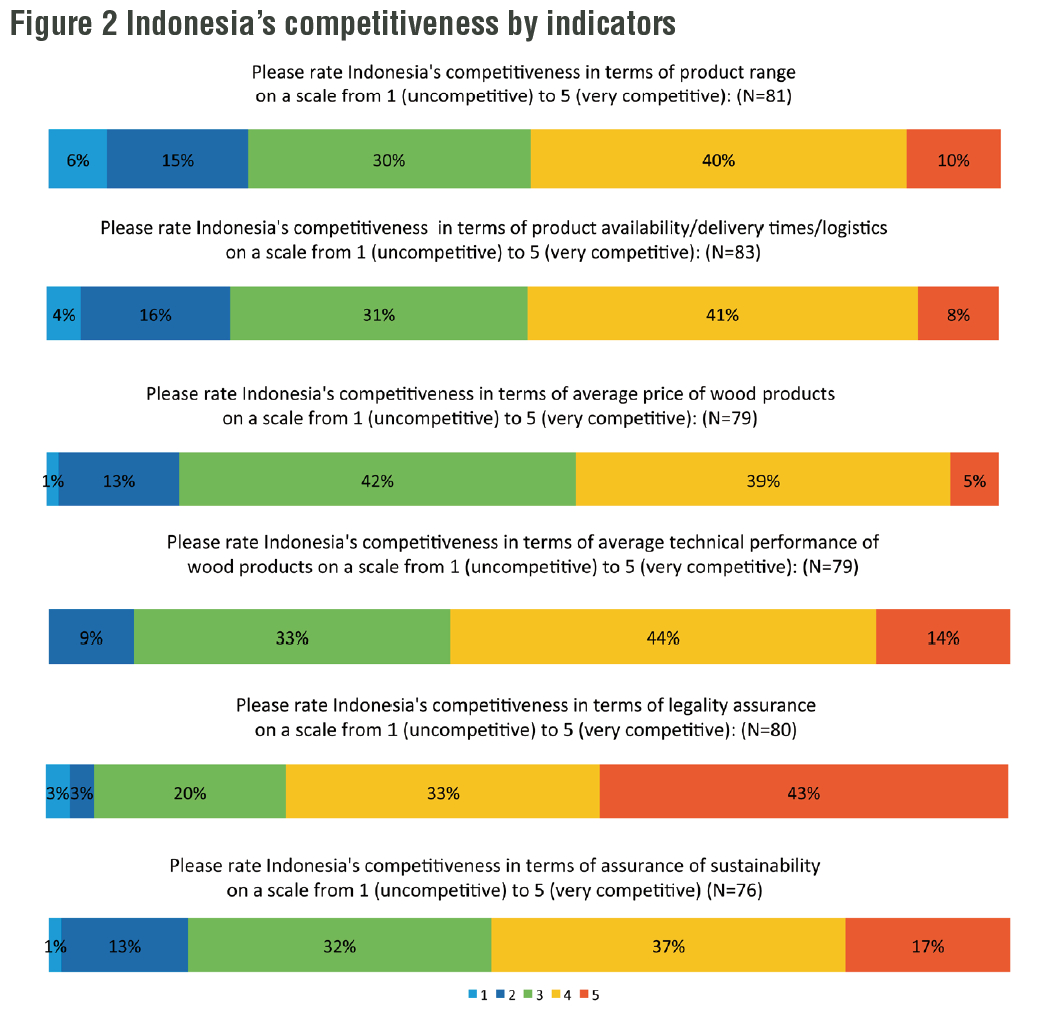 The competitiveness rating for the “product range” may have been affected by a reportedly comparatively low level of commitment of some suppliers in the furniture sector to keep up with European product trends and fashion. One or two furniture importers remarked they were scaling back imports from Indonesia for this reason.   IMM will look into the separate indicator of “adapting to (European) fashion trends” in the follow-up competitiveness ranking planned for 2019. At that time, more Asian partner countries will also be included in the follow-up ranking to enable comparison of Indonesia against its direct competitors.

Anecdotal evidence gathered during the first IMM Trade Consultations in spring 2018 indicate that Indonesia performs well in terms of “quality/technical performance” as well as “reliability/protection of intellectual property” against Asian competitors. However, Viet Nam and China, in particular, were often said to be one step ahead when it comes to “price”, “mass production”, and “adapting to trends”. Moreover, China, Malaysia, and Viet Nam were all reportedly performing better than Indonesia when it comes to “logistics”.

A baseline analysis of the Indonesian furniture sector’s competitiveness relative to other Asian and European suppliers can be found in the IMM EU Furniture Sector Scoping study.

The country exports mainly sawn timber to the EU. It offers a broad range of popular species including Sapelli, Ayous, Azobé, Iroko, Okan and Tali, among others, and is the single most important supplier of tropical sawn timber to a number of the key EU markets. Cameroon performed better than all the other African VPA implementing countries against practically all indicators and was the only African VPA partner country to receive a small number of “very competitive” votes across all indicators.

Against the background of Cameroon’s importance as a tropical timber supplier and the relative political stability in the country, numerous European survey respondents called for a speedy completion of VPA implementation in the country. 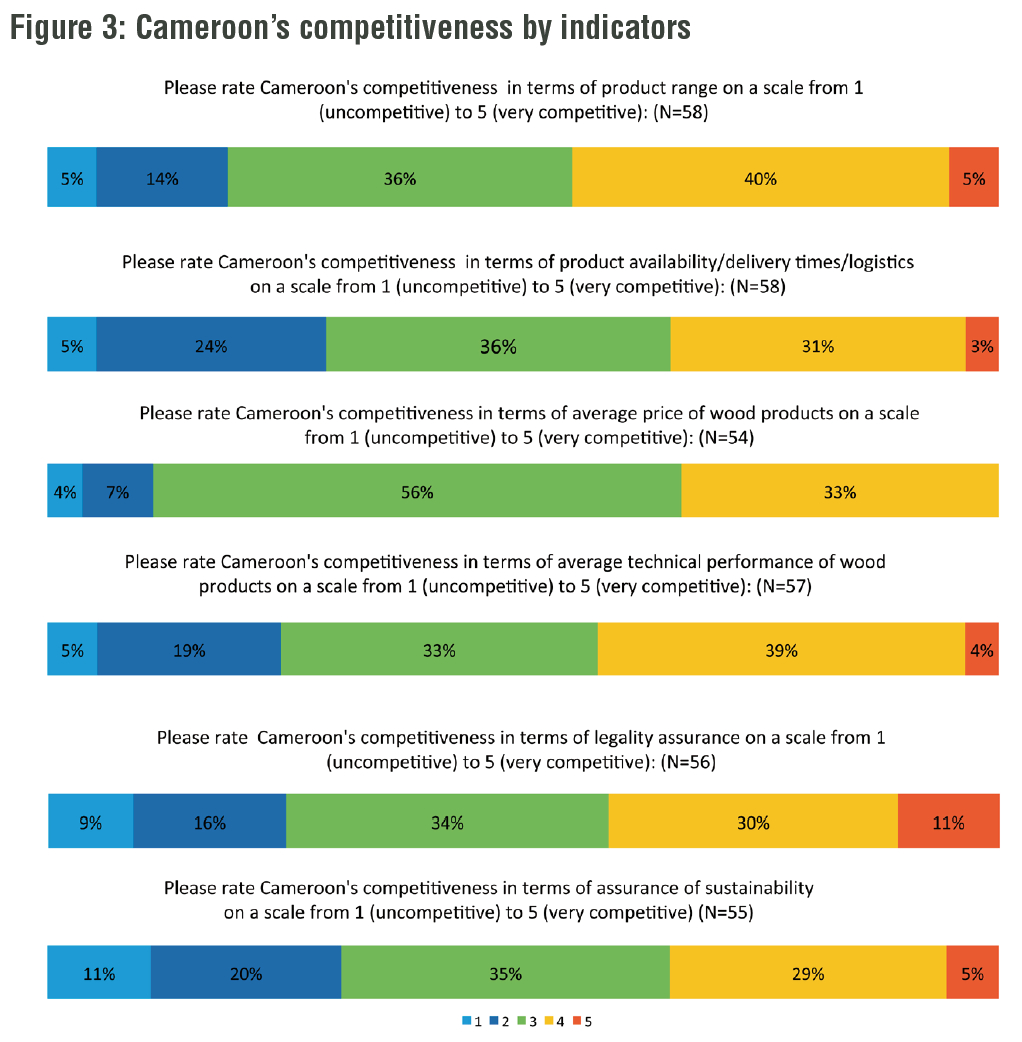 Analysis of the different indicators shows that Ghana performed relatively strongly in “assurance of legality” (48% “competitive” or “very competitive”). Here, the country has likely profited from the advanced state of VPA implementation and the related awareness of major exporters of the EUTR (Figure 4).

The mainly satisfactory to low ratings in terms of “product range” and “availability/lead times” are not surprising given the loss of importance of Ghana as a tropical timber supplier for the EU market over the last decade. 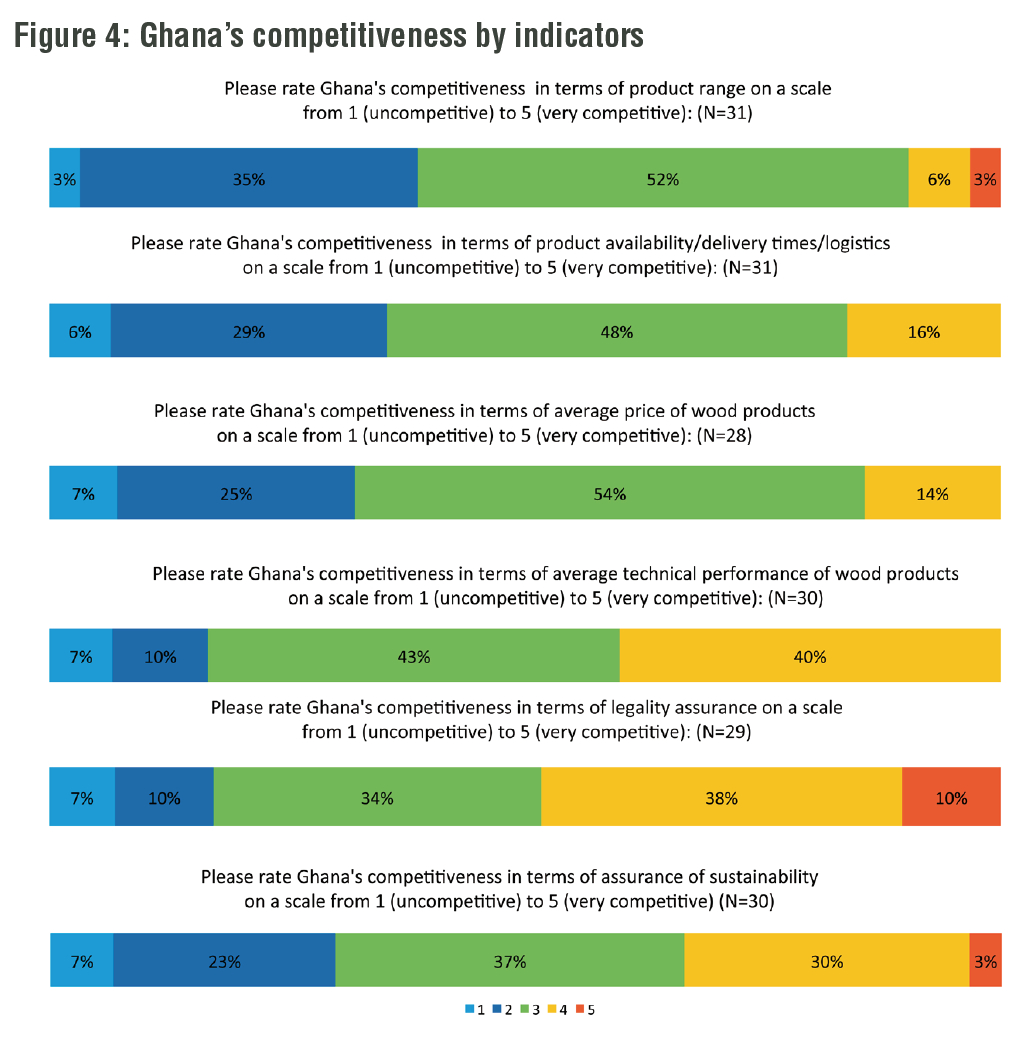 RoC’s ratings were lower on average than those of Cameroon and Ghana, but the country still had quite a significant proportion of average to very good ratings especially in terms of “price”, “product range” and “technical performance” (Figure 5).

Like all other African VPA partner countries Congo Republic supplies primarily sawn timber to the EU markets. Within the EU, Congo Republic is an important supplier primarily for Belgium and France.

For assurance of legality (and sustainability) buyers reportedly mostly rely on FSC certification in the Congo. 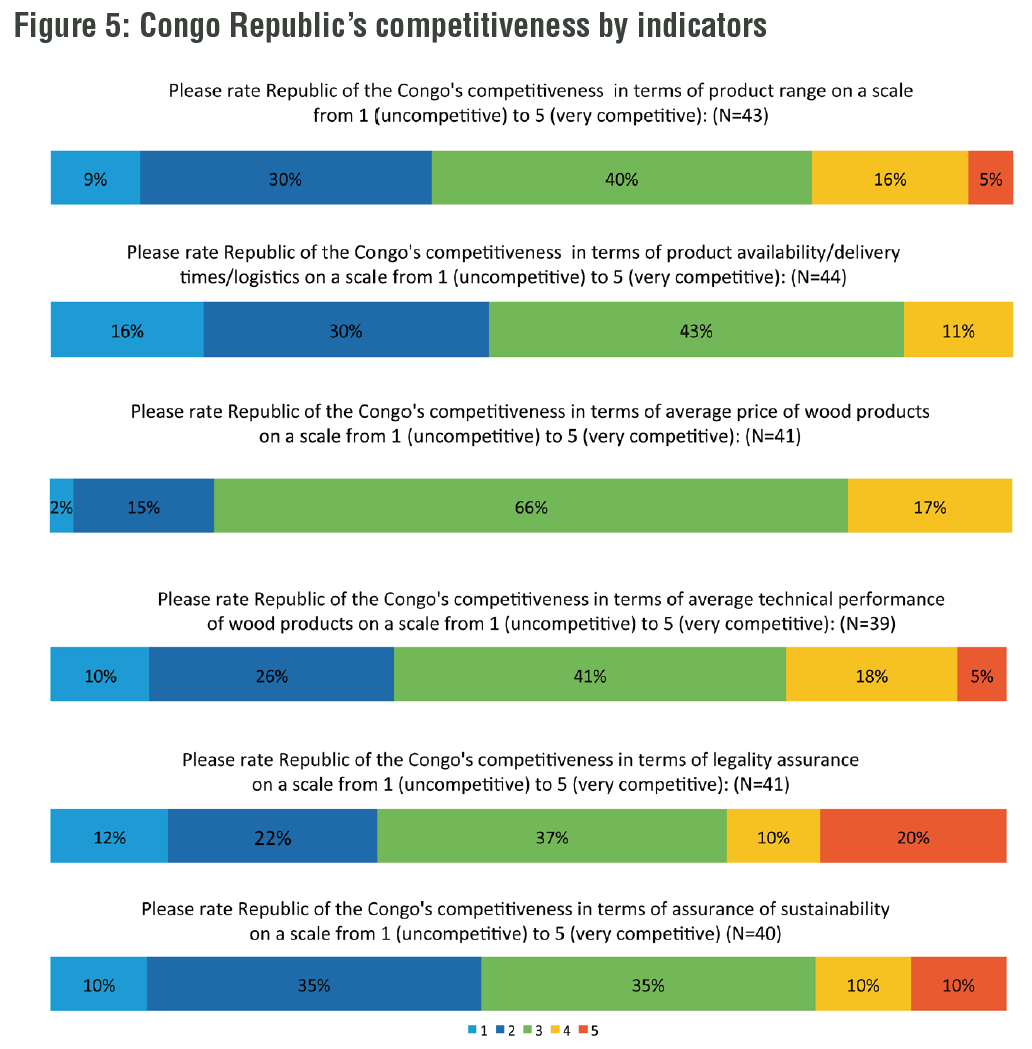 The Central African Republic was rated relatively competitive in terms of “price” by a number of survey respondents. In most other categories, around two-thirds of respondent rated the country “uncompetitive” or “very uncompetitive” (Figure 6).

According to comments from the IMM trade survey, the civil war and its aftermath has made sourcing wood in CAR difficult – especially of verified legal timber. 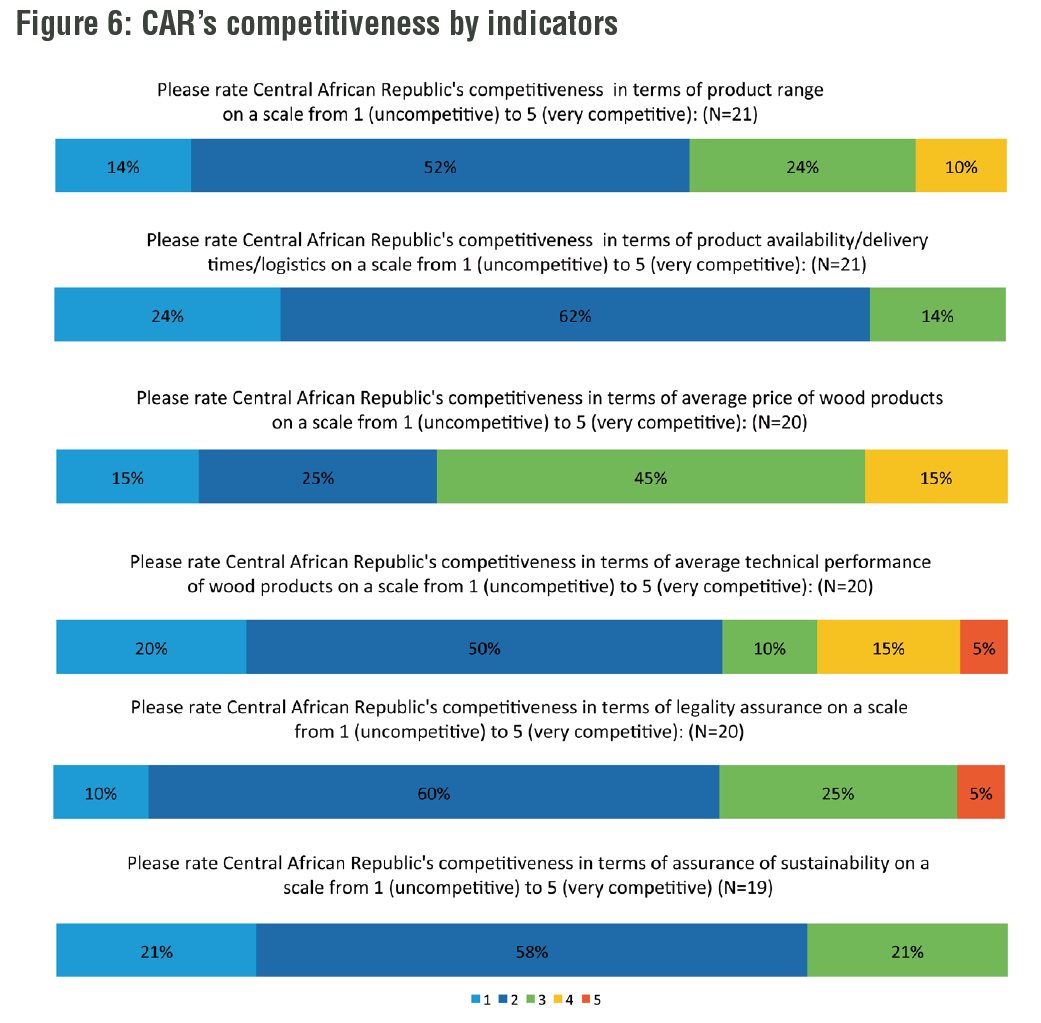 Like for CAR, Liberia’s main strength was identified in the area of pricing by the competitiveness ranking (Figure 7).

Surprisingly, given that obtaining legality assurance in Liberia was frequently described as particularly difficult during interviews with IMM correspondents, is the comparatively good rating for “obtaining proof of legality”. One reason for this may be that only a relatively small number of survey respondents participated in the competitiveness ranking for Liberia (13-15 companies, depending on the indicator. By way of comparison, Indonesia was ranked by around 80 and Cameroon by 50-60 companies).

The small number of respondents engaged in Liberia may have specialised in sourcing from there and thus be used to carrying out risk assessment and mitigation in the country. Liberia’s rating against the other indicators was weak. 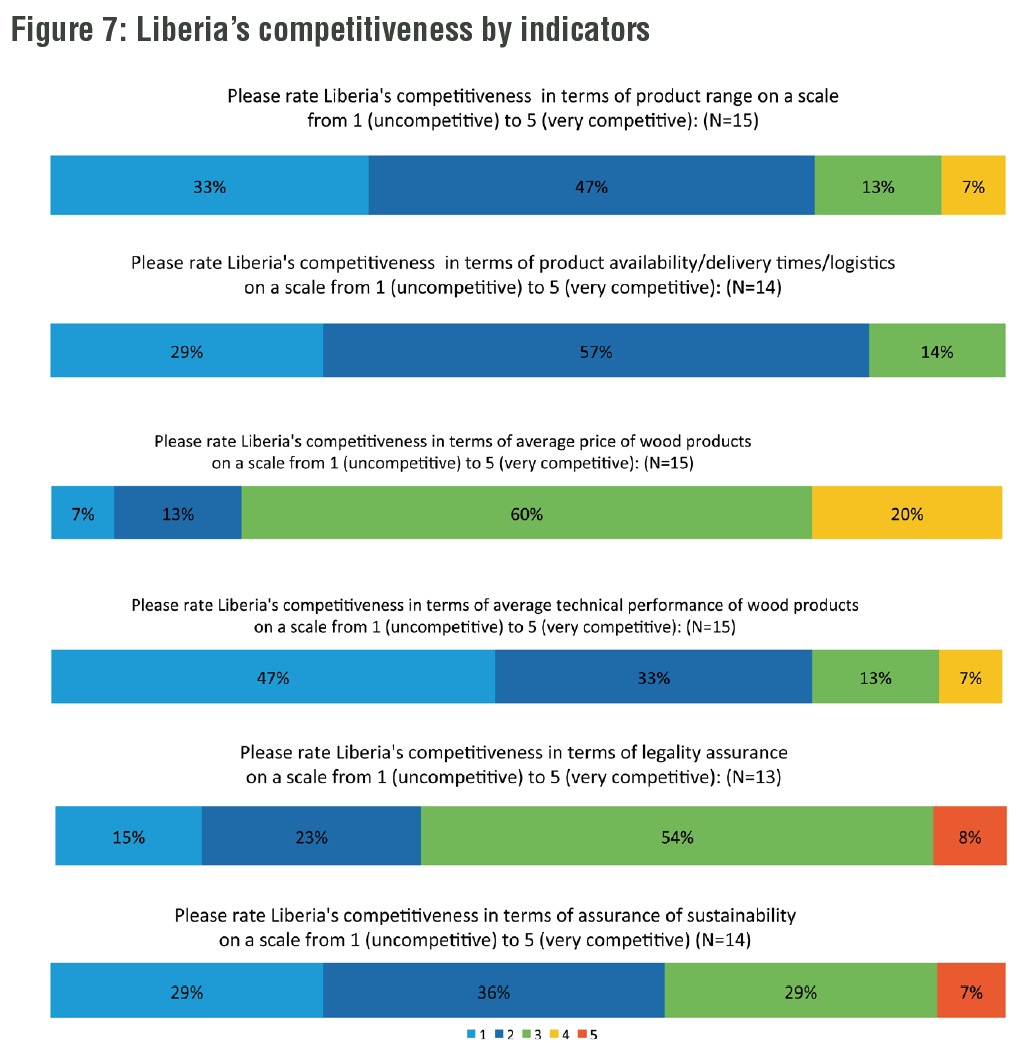