As a part of the IMM 2018-2020 EU trade surveys, respondents were asked whether FLEGT Licensing and the introduction of the EUTR had had any direct impact on the share of tropical timber in their overall timber imports. As demonstrated in figure 1, the number of companies reporting small increases in timber and timber product imports due to the market introduction of FLEGT-licensed timber rose sharply to 28% last year; this compares to 12% in both 2018 and 2019 (figure 1).

Respondents mentioned Indonesia gaining market share from South American and Malaysian suppliers, for example. 71% reported “no change” and there were no companies reporting decline in tropical timber imports due to FLEGT-licensing in 2020. 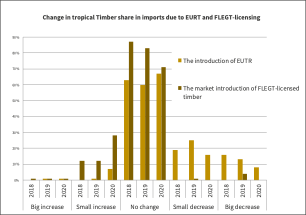 A contrasting trend was recorded for EUTR, where only a very small number of respondents reported increases but quite a large proportion in each year flagged up decline. However, the number of respondents reporting either small or big decreases in the share of tropical timber in their overall timber imports due to introduction of EUTR fell from 35% in 2018 and 38% in 2019 to 24% in 2020 (figure 1).

Survey respondents reporting negative impacts indicated that EUTR due diligence had narrowed their supply base in tropical countries. An increasing concentration of tropical timber and timber product import trade in the hands of “specialist” exporters and importers was also noted. This means that overall volumes produced and traded are not necessarily declining, but the number of companies involved in  trade is, with larger companies typically taking over from smaller competitors.

Respondents also indicated that EUTR had caused the sector to reconsider its supply chain relationships, which sometimes resulted in increasing substitution of tropical hardwoods with alternatives, including temperate hardwoods and chemically or thermally modified timber as a result of EUTR.