IMM’s 2019 EU trade survey saw Indonesia and Malaysia overtake Cameroon as the expected most important supplier of tropical timber five years from now (chart 1). In 2018, Cameroon had been perceived to be the most important future supplier, followed by Brazil, Congo Republic, Malaysia and Indonesia. The survey question on the future of tropical timber supply was answered by 95 European timber and timber product importers and merchants in 2019 and by 67 in 2018.

Attitudes to Indonesia, in particular, changed significantly in 2019, with the country obtaining the most individual votes by far and overtaking all four countries that were considered potentially more important as future suppliers in 2018. The VPA and FLEGT-licensing was frequently mentioned as the reason behind this projection, as was the product range, political stability and the “overall level of organisation” in the country. The last two reason also applied to Malaysia and Vietnam. Vietnam also gained strongly in 2019, after being mentioned hardly at all in 2018. 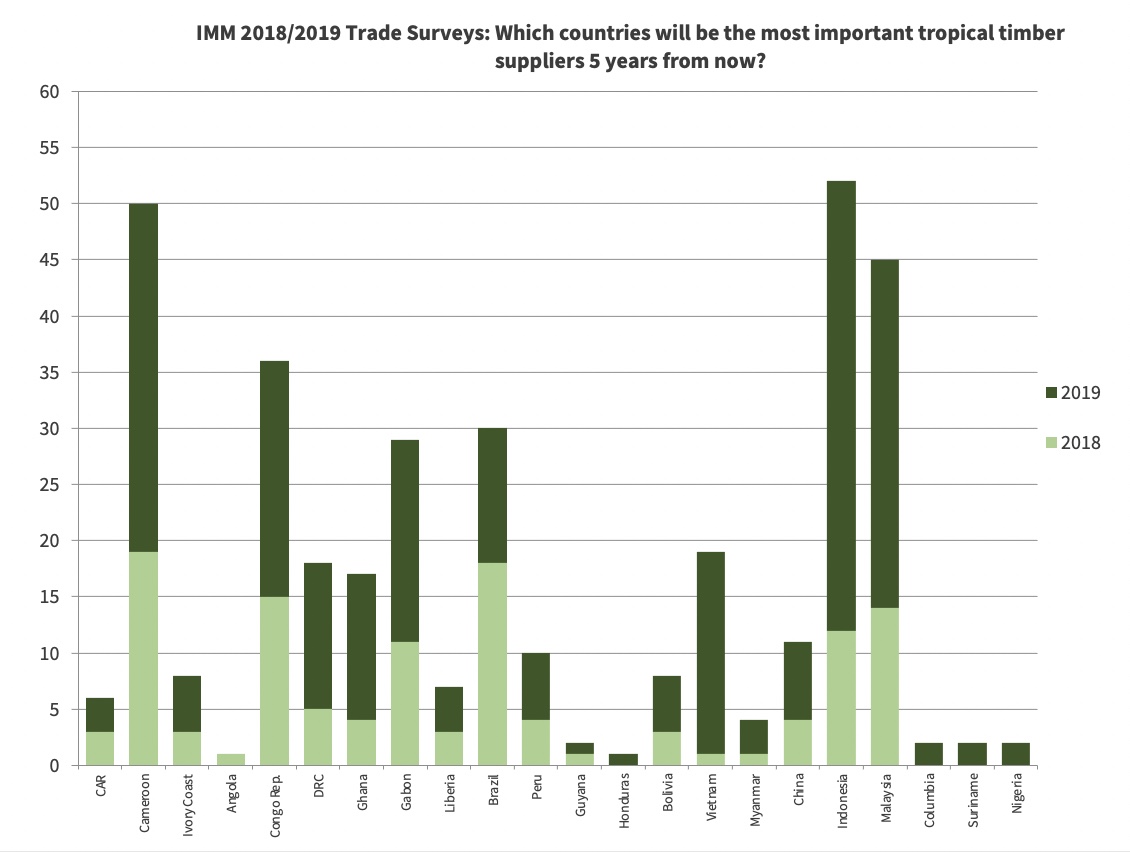 Where the African countries are concerned, respondents mentioned political instability, as well as a general administrative difficulties, also with regards to EUTR due diligence, as factors potentially hampering their future as suppliers to the European market. Cameroon’s importance was repeatedly highlighted both as a supplier in its own right and as a place of transit for shipments from the Congo Basin. However, political uncertainties would make Cameroon’s future as a supplier increasingly difficult to predict, according to respondents.

Similar comments were made with reference to several South American countries, especially Brazil. After being considered second most important as a future supplier after Cameroon in 2018, Brazil fell through the ranking in 2019 (9th place). Political instability and the country becoming an increasingly “complicated and risky” supplier under EUTR were quoted as the main reasons. In this context, several other South American countries were mentioned as having potential to gain in importance, including Peru, Bolivia, Columbia, Suriname and the VPA partner countries Guyana and Honduras. However, political instability was mentioned as a factor potentially affecting this development. A small number of respondents from the Netherlands and the UK remarked that South American countries could gain market share from Asian supplier countries in the future, due to the limited availability of third-party certified timber in Asia.