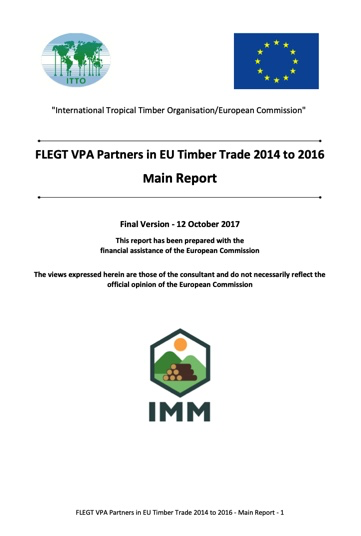 This report updates the data contained in the IMM Baseline Report1 which considered VPA partner trade flow trends in the decade 2004 to 2013. As far as possible, this report does not duplicate analysis in the Baseline Report, but rather updates key forest resource and trade data and includes a commentary on market trends in the 2014 to 2016 period.

Only at the very end of the period reviewed in this report, in November 2016, were the first ever FLEGT licenses issued by Indonesia. Therefore, the report is limited in the extent to which it can assess actual market impact and acceptance. However, to better establish the baseline conditions for entry of FLEGT licenses into the EU market, the report includes a more detailed appraisal of the prospects for FLEGT licensed timber from Indonesia.

The combined share of the 17 VPA partner countries in global tropical wood products trade2 remained stable at 81% in the three years between 2014 and 2016. However, this apparent stability obscures a highly volatile market situation during the review period, with considerable variation in the fortunes of VPA partner countries and their competitors.

The total value of global trade in tropical wood products increased 13% to peak at US$35.0 billion in 2014 before sliding 9% to US$31.9 billion in 2015 and a further 3% to US$31.1 billion in 2016. The sharp rise and subsequent fall in trade was largely driven by market developments in China, particularly a short-lived speculative boom in imports of tropical logs during 2014, mainly rosewood species from the Mekong region and Africa. China’s imports of tropical wood products increased by nearly 50% in the two years between 2012 and 2014 to peak at $11.3 billion and then declined by 30% in the next two years to $8.1 billion in 2016. The spike in exports to China was particularly pronounced for Lao PDR, Thailand, Myanmar, and Viet Nam.

Another key trend during the review period was a rise in Indonesia’s share of global trade in tropical wood products. In 2016, Indonesia accounted for 18.2% of the total value of global tropical wood exports, a rise from a low of 17.2% in 2014. This increase was a reversal of a long-term trend of declining share in relation to countries of the Mekong region, particularly Thailand and Viet Nam. The rise in Indonesian trade between 2014 and 2016 was concentrated in wood furniture, together with mouldings (including decking), plywood, and joinery products such as doors and laminated window scantlings.

In contrast, the five VPA-implementing countries in Africa accounted for 4.2% of global trade in tropical wood products in 2016, continuing a long-term slide in share from 5.1% in 2011. After a short-lived boom due to the rise in rosewood exports to China in 2014, tropical wood exports from West and Central Africa sunk to their second lowest level in the last decade in 2016, only marginally greater than exports in 2009 in the immediate aftermath of the global financial crises. VPA implementing countries in Africa were falling further behind Asian countries in efforts to develop internationally competitive export markets for high value wood products such as furniture.

Several non-VPA countries increased share in global tropical wood products trade in the decade to 2014, and maintained high levels of trade in 2015 and 2016, notably Mozambique in East Africa, and Papua New Guinea and the Solomon Islands in the Pacific region. Most exports from these countries comprise logs destined for China and India.

The economic background in the EU created challenging market conditions for timber products from VPA partner countries during the review period. VPA partner exporters had to contend with the relative weakness of the euro and other European currencies, the slow pace of EU economic recovery from the financial crises, the dominant position of European and Chinese manufacturers in many market segments, the strong fashion for temperate woods (particularly oak), intense and rising competition from a wide range of non-wood substitutes, and uncertainty created by the Brexit vote in June 2016.

Key economic sectors in the EU were recovering only slowly during the review period. Europe’s construction sector was under-performing compared to other industrial sectors and becoming more focused on new build and Eastern Europe, sectors generally less attractive as markets for tropical wood than refurbishment in western Europe. Overall growth in the furniture sector was very slow; by the end of 2016, the total volume of furniture manufacturing in Europe was still down around 15% compared to the period before the global financial crises.

Measured in euros, the value of EU imports of tropical wood products increased 15% to €3.82 billion in 2015 before declining 1% to €3.79 billion in 2016. The euro value trend was influenced by exchange rate swings, particularly a 20% depreciation against the US dollar between July 2014 and March 2015. In US dollar terms, EU imports of tropical wood products were flat at a historically low level of around $4 billion per year in the period 2014 to 2016.

However tropical countries regained a little share in import value mainly at the expense of Russia and non-EU European countries in 2015 and of China in 2016. The recovery in EU imports of tropical wood products in 2015 and 2016 was particularly pronounced for furniture and sawn wood, although there were minor gains for all other product groups.

During the review period, the euro exchange rate was generally unfavourable to Asian suppliers, being low against the US dollar but strong against currencies in Eastern European countries including Russia and Ukraine which both significantly increased hardwood supply to the EU. African countries benefitted to some extent in the EU market, but main beneficiaries were domestic and Eastern European manufacturers.

EU imports of wood products from the five African VPA implementing countries increased 12% to €377 million in 2015 and then an additional 13% to €426 million in 2016. As a group, the share of African VPA implementing countries in total EU tropical wood import value declined from 11% to 10% between 2013 and 2015 but rebounded to 11% in 2016 due mainly to a surge in imports from Cameroon.

In most EU market segments, domestic producers are the major competitors to wood product suppliers in VPA partner countries. Of total supply into the EU market in 2015, domestic producers accounted for 97% of sawlogs and veneer logs, 82% of sawn hardwood, 88% of veneer, 53% of plywood, 99% of wood windows, 95% of wooden doors, 70% of real-wood flooring and 87% of wood furniture.

During the review period, the share of EU wood manufacturers in most market sectors was rising, boosted by the relative weakness of the euro and the market advantages of proximity to the consumer. One indicator of the improved global competitiveness of domestic manufacturers is the EU’s trade surplus in wood products. After 6 years of continuous increase, the value of EU exports of wood products peaked at €20.51 billion in 2015, the highest level ever, and fell by only 0.5% to €20.40 billion in 2016. In 2016, the EU had a €3 billion trade surplus in wood products; this compares to a €3 billion deficit before the financial crises.

Even in those wood sectors where European manufacturers have traditionally been weak and more dependent on imports, such as durable goods for outdoor use and in appearance grade wood, new innovative products are taking share from external suppliers. Key innovations include a wide range of new surface finishes to enhance the appearance and performance of temperate woods and panel products, and thermal and chemical modification processes to enhance the durability of domestic wood species.

A key trend in the EU creating significant challenges, and a few new opportunities, for wood products suppliers in VPA partner countries is growing demand for engineered wood products (EWPs) in a wide range of wood applications. The trend is closely linked to the move to rising quality and efficiency standards in the EU and to more modular forms of off-site, prefabricated construction.

The move to EWPs has been challenging for external suppliers into the EU, particularly in the tropics, and EWP markets are heavily dominated by domestic manufacturers that are familiar with the required technical standards and well positioned to work closely with building engineers, architects and contractors.

Although VPA partners in South East Asia are supplying various forms of glulam into the EU market, and possibly also LVL, this is currently restricted to non-structural applications. However, there may be some limited new opportunities to supply tropical wood for specialist grades of EWP drawing on the high strength to weight ratio and durability of tropical wood.