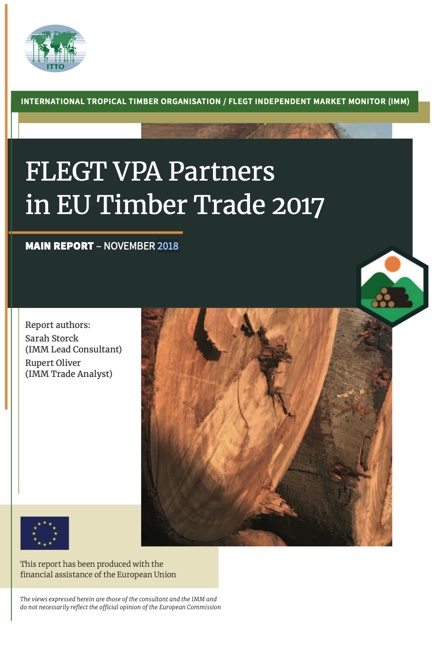 This IMM report is the first to cover a period during which FLEGT-licensed timber was available on the EU market, after Indonesia started issuing licences in November 2016. It is also the first when IMM had access to a full network of country correspondents in the seven EU countries accounting for the bulk (i.e. consistently around 90%) of EU tropical timber and timber product imports from VPA partner countries. The seven “key” EU markets are Belgium, France, Germany, Italy, Netherlands, Spain and the UK. IMM also had a correspondent in Indonesia, the only FLEGT-licensing country, and Ghana, the country most likely to start FLEGT-licensing in the foreseeable future.

IMM has released a report on “FLEGT VPA Partners in EU Timber Trade 2017” which uses the latest data to assess the changing market position of VPA partner countries in the international timber trade. The report comments on the relative competitiveness of timber industries in the VPA Partner countries during 2017.

As Indonesia started issuing licenses in November 2016, this is the first IMM report to cover a period during which FLEGT-licensed timber was available on the EU market. It is also the first IMM Annual report for which IMM had access to comprehensive survey data from a full network of country correspondents in the seven EU countries accounting for the bulk (i.e. over 90%) of EU tropical timber and timber product imports from VPA partner countries.

According to the IMM report, EU market prospects were generally positive in 2017, with most countries’ GDP, construction and wood product manufacturing sectors trending upwards during the year. However, the pace of market growth was slow amid signs that wood was losing share to non-wood alternatives in several end-use sectors.

EU timber products imports from Indonesia fared better than imports from other tropical countries during 2017, slightly increasing in value overall and taking a larger share of total tropical imports. However, the major beneficiaries of the slow rise in EU demand in 2017 were domestic and other European suppliers rather than tropical suppliers for which share of the overall market continued to decline.

The declining share of tropical producers in the EU market during 2017 was partly supply related as producers focused more on supplying China and other emerging markets and North America. Supply problems were compounded in the EU as buyers continued to rely heavily on only a limited range of timber species and were becoming more dependent on fewer exporting companies in the tropics to better manage risk, both regulatory and reputational, particularly associated with EUTR.

IMM surveys of trader opinion in 2017 also highlighted the competitiveness of Indonesia relative to most other tropical countries supplying the EU market. The surveys showed the high level of support for FLEGT licensing by Indonesian exporters, with most reckoning the process had made exporting to the EU easier and helped boost sales.

EU importers agreed that the FLEGT licensing was simplifying importing procedures and helping their EUTR conformance at a time when there are clear signs of EUTR enforcement becoming more rigorous in the EU. Around 40% of EU respondents said they would be willing to pay price premiums for FLEGT licensed timber, but typically of no more than around 5%. The perception amongst some importers that licensing is no more than an assurance of legality, which is expected anyway, is a factor limiting willingness to pay market premiums.

Detailed analysis of trade statistics in the report shows that performance of Indonesian wood products in the EU market immediately following licensing was mixed. There was no growth in imports for high value sectors like furniture and joinery. This was partly due to changes in exchange rates – the euro fell to a 14-year low against the US dollar in the very same month that licenses were first issued.

The report also observes that expectations of a rapid increase in trade immediately following licences may have been exaggerated in sectors like furniture and joinery where the specific environmental features of Indonesian wood products have been less significant barriers to competitiveness than other issues such as relative labour costs, logistics, processing efficiency, innovation, and marketing.

In contrast, EU imports of some lower-value products from Indonesia, such as decking and plywood – where Indonesian products are familiar to EU importers and already favoured for their strong technical performance – showed a quite significant upturn during 2017.

The report concludes with a series of recommendations to build on the market opportunities presented by FLEGT licenses. It particularly emphasises the need for communication activities, with messages targeted for specific user groups, engaging more closely with the private sector and through development of tools particularly designed to improve business-to-business communication. Communication materials need to appeal to and reach a broad target audience in the EU, including retailers, architects and specifiers, for example, and not just operators (as defined in EUTR).

The report notes that as a lengthy and often complex process, there needs to be more communication of the different stages of VPA implementation and the transformative processes involved in VPA partner countries. Against the background of European tropical timber promotion as well as companies’ procurement policies focusing on “sustainability”, the report identifies a need to explain and raise awareness of how FLEGT VPAs contribute to environmental, social, and economic sustainability. This should be placed in the wider context of a debate on how sustainable management of forest resources can be best achieved in tropical countries.

Finally, the report notes that while the FLEGT licence is a credible endorsement and an essential underpinning for market development in the EU, it is unlikely to deliver significant or sustained increases in market share in isolation. Imported timber products, not just from the tropics, are struggling to compete with domestic suppliers and non-wood substitutes in the EU. All actors need to avoid raising expectations of immediate market gains in what is better presented as a long- term process of market transformation. FLEGT partners also need to consider how FLEGT licenses fit within their broader timber industry and export development strategy.