FLEGT-licensed timber in the EU market 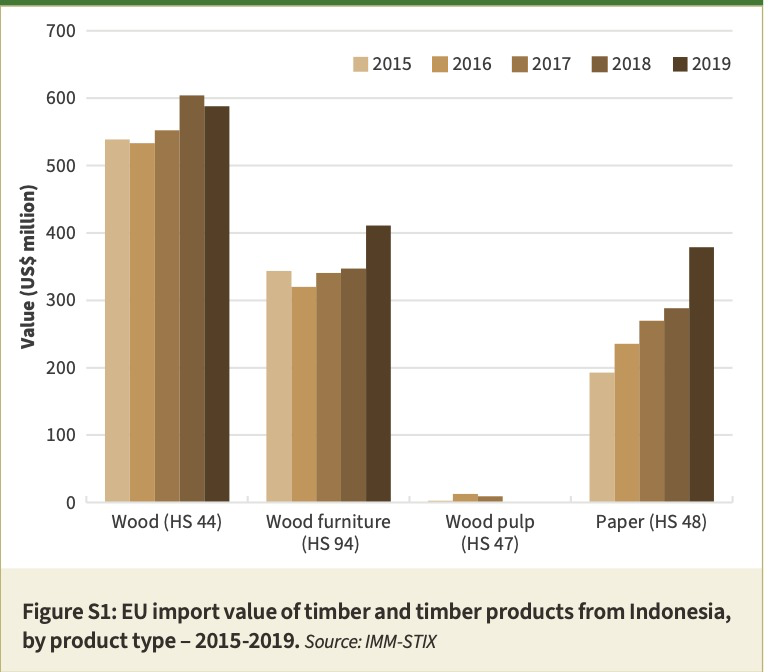 The rise in EU imports of FLEGT-licensed wood products from Indonesia coincides with a wider recovery in EU demand for wood products generally. Activity in key EU wood end-use sectors, such as construction and furniture, bottomed out in 2013 and then recovered at a slow, but relatively consistent rate until 2019. China, Russia and other countries in the Commonwealth of Independent States (CIS) region remained the dominant partners in EU import  trade, although some tropical countries, particularly Indonesia, but also including Viet Nam, India and Brazil, began to  make new inroads in the EU market, most notably in the furniture sector. 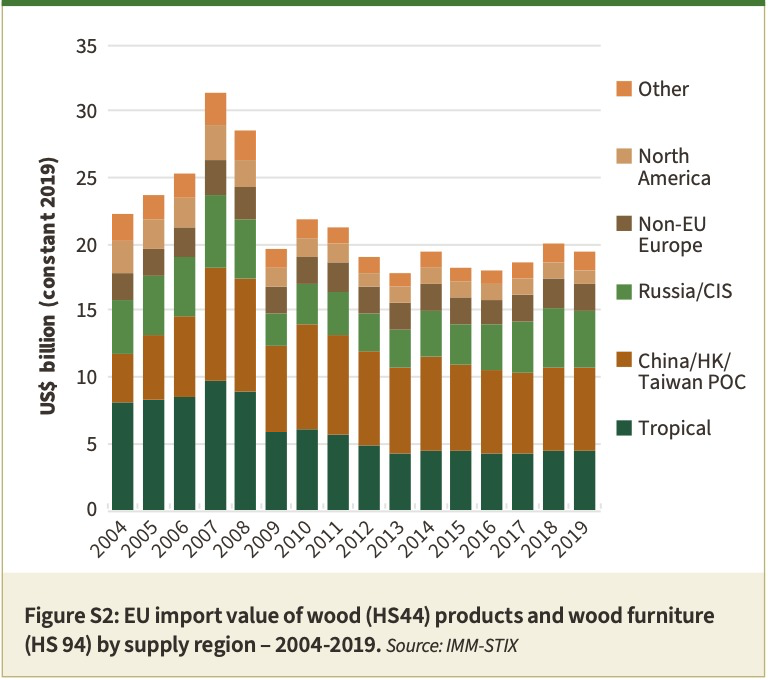 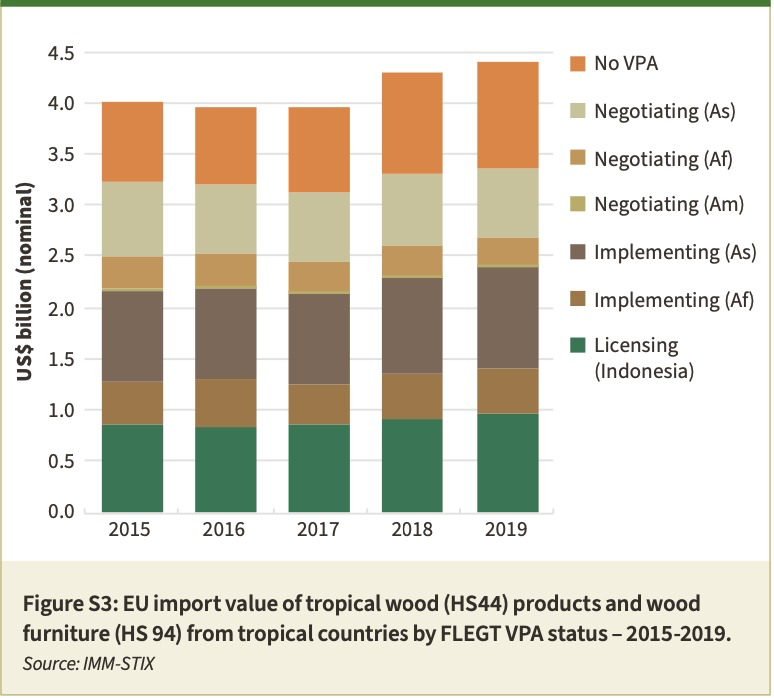 Summarising EU wood products imports from VPA partner countries other than Indonesia, none of which were issuing FLEGT Licences in 2019:

IMM surveys in 2019 flagged up that trade in VPA partner wood products – just like trade in many other commodities – was again facing an increasingly uncertain economic environment, both in the EU and globally. According to the EU Winter 2020 Economic Forecast published on 13 February 2020, GDP growth  in the EU27 slipped to 1.5% in 2019, down from 2.1% in 2018. According to the UK Office of National Statistics, the UK economy grew by 1.4% in 2019, only marginally higher than the 1.3% rate in 2018, and recorded zero growth in the last quarter of the year.

With an expanding range of activities and outputs, IMM gained a thorough understanding of the relative market positions of FLEGT-licensed products from Indonesia, as well as timber and timber products from other VPA partner countries in the EU in 2019. The network of IMM correspondents continued to monitor market uptake of FLEGT Licences in the seven “key” EU countries3 accounting for the bulk (i.e. consistently around 90%) of EU tropical timber and timber product imports. IMM also continued to employ correspondents in Indonesia and Ghana. The two partner country correspondents produced update reports, used to inform the Indonesia section of this report and updates on Ghana on the IMM website, and acted as points of liaison between IMM and partner country authorities and organisations.

The EU trade survey conducted by IMM in 2019 had a broad scope, in terms both of content and target audience. The survey sample included EU importers of sawn timber, decking, plywood, mouldings logs, veneers, doors, window frames, as well as furniture andfurniture components and other wood products from VPA partner countries. Respondents accounted for up to 75% of the key EU countries’ total imports of HS Chapter 44 wood products. IMM correspondents also interviewed the FLEGT/EUTR Competent Authorities in their respective countries as well as timber trade federations and EUTR Monitoring Organisations.

In 2019, IMM published four special studies including on; architects’ attitudes to the use of tropical timber in construction and their awareness of the FLEGT VPA programme; EU public timber procurement policies; EU wood promotion programmes and their recognition of FLEGT; and the impact of FLEGT on forest sector investment. IMM also continued to organise “Trade Consultations”, which took place in Antwerp and Barcelona in 2019.

Also during 2019, IMM continued to build its statistical capacity so that it has access to, and can readily distribute, the latest global timber trade data each month. This now facilitates near real time monitoring, particularly important during the volatile trading conditions that have emerged since the onset of COVID-19. The insights gained from regular analysis of the latest trade statistics, surveys of traders and regulators, and special studies informs the series of IMM recommendations identified in this IMM Annual Report to help build market resilience for FLEGT- licensed timber in uncertain and challenging times.

The 2019 IMM EU trade survey (chapter 8 of the Report) showed continuation of the positive trends in market perceptions of FLEGT-licensed timber from Indonesia. There was a sharp rise in the proportion of survey respondents finding the administrative process of importing FLEGT-licensed timber easily understandable and manageable between 2017 and 2019. Almost 80% of 2019 respondents said that FLEGT licensing was making importing wood products from Indonesia easier compared to EUTR due diligence (Figure S4). Moreover, a significantly higher number of respondents than in 2018 acknowledged sustainability aspects of FLEGT. 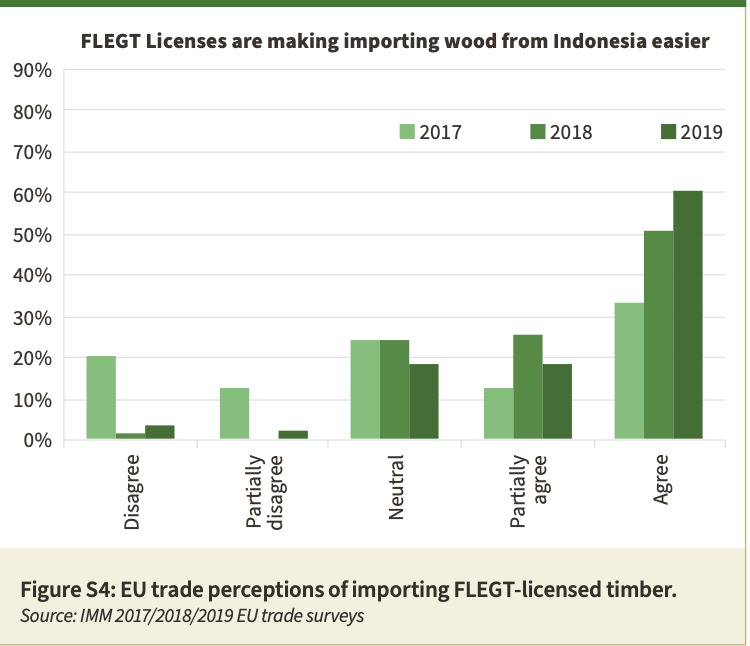 The 2019 trade survey confirmed contrasting impacts of FLEGT licensing and the EU Timber Regulation (EUTR) on European importers’ purchasing behaviour. 35% of respondents in 2018 and 38% in 2019 reported either small or big decreases in the share of tropical timber in their overall timber imports due to introduction of the EUTR. Survey respondents indicated that EUTR due diligence had narrowed their supply base in tropical countries. Respondents also indicated that the EUTR had caused the sector to reconsider its supply chain relationships, which had frequently resulted in increasing substitution of tropical hardwoods with alternatives, including temperate hardwoods, chemically or thermally modified timber or non-wood substitutes. No respondents in 2018 and just 2% of respondents in 2019 said their imports of tropical timber had increased as a result of the EUTR.

In the case of the market introduction of FLEGT-licensed timber from Indonesia, the majority of respondents – 87% (2018) and 83% (2019) – reported no change in the share of tropical timber in their overall timber imports. 13% of respondents in both years registered large or  small increases.

The IMM Annual Report also provides an update on market constraints to FLEGT-licensed timber identified in the 2017 report (chapter 5 of the Report). The sharp decline in the number of both HS code and other FLEGT Licence mismatches (e.g. relating to shipments’ weight or volume) registered in 2018 has continued in 2019. There was also further progress in the development of an electronic licensing scheme, as well as in communication and marketing efforts, both within Indonesia and in the EU.

The IMM Annual Report includes an analysis of the share of VPA partner countries in global tropical wood products trade in 2019. This is to ensure that trade flows between VPA Partner countries and the EU are considered in their appropriate global context. Globally, trade in tropical wood products grew at a muchslower pace, by 0.2% to US$41.7bn, in 2019, than during the previous two years, when there was a sharp rebound from the dip in 2016, when the speculative rosewood boom in China had ended. Unlike the 2009 to 2014 period, when rapid trade growth was driven largely by China’s imports of primary wood products, particularly rosewood, recent growth is mainly due to rising wood furniture exports, notably from Viet Nam and India destined for the United States.

Global trade in tropical wood products in 2019 was influenced by overall cooling in the pace of economic growth. The global economy had already slowed sharply in the last three quarters of 2018, and global economic activity remained weak at least until the third quarter of 2019, according to the International Monetary Fund’s World Economic Outlook published on 15 October 2019. The IMF blamed this on “rising trade and geopolitical tensions”, which “have increased uncertainty about the future of the global trading system and international cooperation more generally, taking a toll on business confidence, investment decisions, and global trade”. Global economic growth was estimated at 2.9% in 2019 according to the World Economic Outlook from 9 January 2020. The trade dispute between the US and China had a direct impact on the trade in tropical wood products, increasing opportunities for South East Asian manufacturers, particularly in Viet Nam, in the US market for wood furniture and other finished wood products. 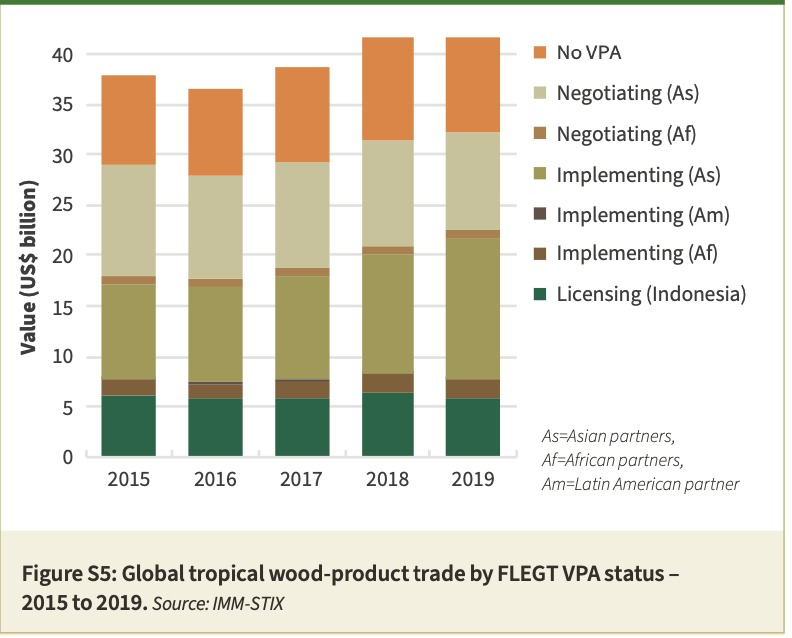 Alongside the assessment of the EU market for FLEGT- licensed timber and of global trade in tropical wood products, IMM monitors market impacts of policy measures and regulations with potential to generate demand for timber from FLEGT licensing VPA partner countries in non-EU  countries. Analysis of trade data  in 2019 shows that the goal of closing world markets to illegal wood products is already well advanced. In 2019, 66.5% (US$27.6 billion) of the total value (US$41.5 billion) of recorded tropical wood product exports worldwide were destined for countries with regulatory measures to eliminate illegal trade (Figure S6)4. This compares to 62.2% of tropical trade in 2018. The rise in the proportion of tropical wood products destined for regulated markets in 2019 was due primarily to the decline in imports by China, while US imports of wood products from tropical countries, particularly Viet Nam, increased sharply during the year. 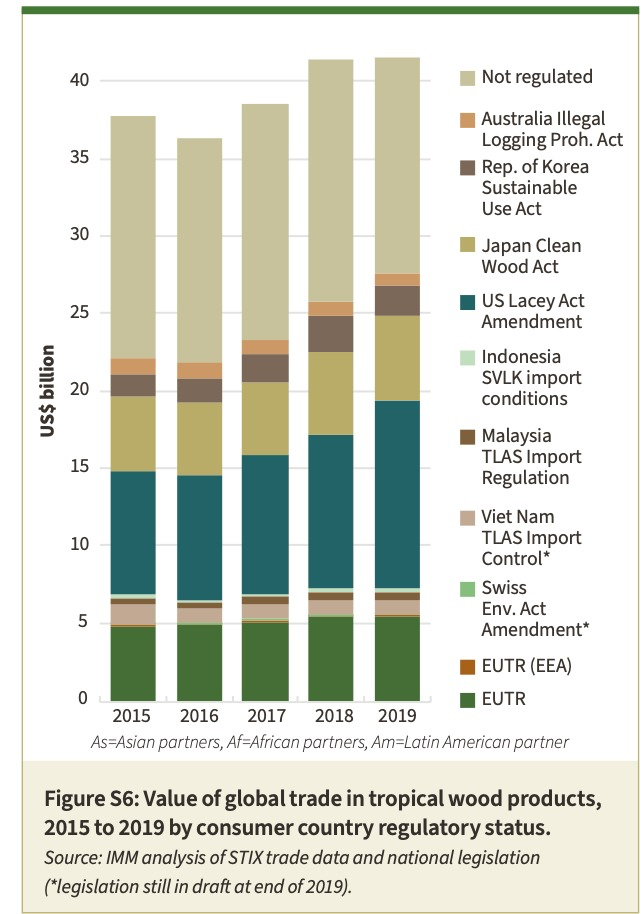 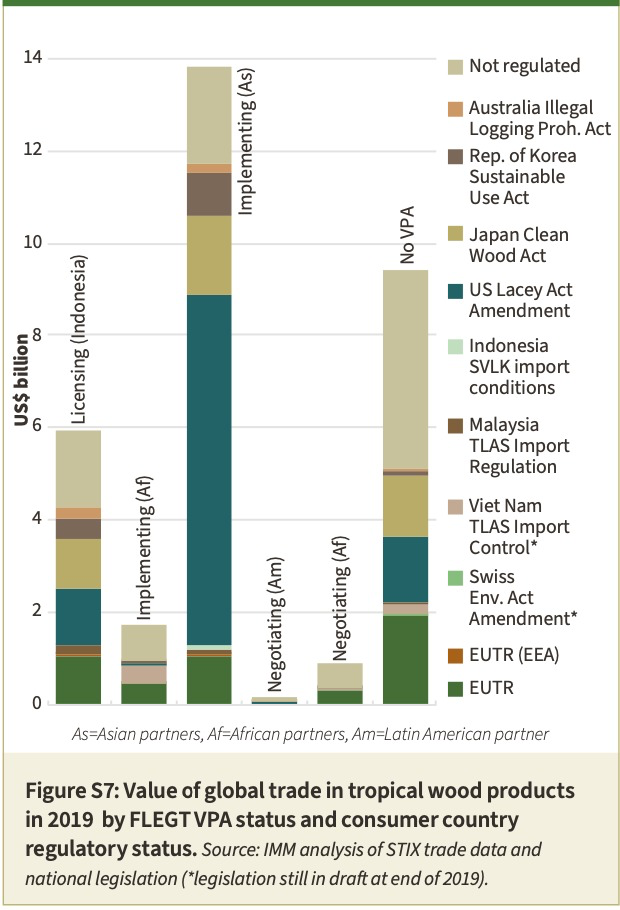 The IMM 2019 Annual Report shows an increasing level of recognition of FLEGT licensing as a means to reduce importers’ own risk under the EUTR and increasing awareness of the wider benefits of implementing FLEGT VPAs in partner countries. It also demonstrates EU trade familiarity with the administrative processes involved in importing FLEGT-licensed timber and a very high level of acceptance of these processes.

IMM survey data and feedback from IMM trade consultations suggests that EUTR has prompted EU importers to reassess their supply chains, especially in countries considered “high risk” and relationships were not unfrequently modified as a result (see Chapter 8 for details). However, this has not necessarily led to replacement ofnon FLEGT-licensed tropical timber suppliers with licensed. More frequently, importers reported that imports of certain products or species were discontinued and the product either sourced from specialist importers in the EU or replaced with non-tropical or even non-wood alternatives.

This highlights once more the fundamental importance of raising awareness of the long-term benefits of the sustainable use of tropical timber and addressing environmental prejudice in EU markets. Partner countries should be encouraged to develop individual marketing strategies for their prospective FLEGT- licensed timber products in the EU as they approach the end of the VPA implementation process.

It also highlights the importance of continuing efforts to bring more VPA processes to a successful conclusion and widen the source-base, range and availability of FLEGT- licensed timber and timber products.

The second IMM investment study, focussing on Viet Nam and Indonesia and summarised in this report, shows that FLEGT VPA implementation and licensing has a positive impact on the investment enabling environment in VPA partner countries. It identified correlation between the VPA, investment volumes and a shift in investments from forestry and logging towards investment in further processing industries in Indonesia. The study also demonstrates that the potential of the FLEGT VPA process for attracting additional investment would likely be reinforced by integration of relevant stakeholders from the banking and financial sector in the process.

The Report concludes with a series of recommendations.

2. Inline with previous IMM Annual Reports, this report focuses on tropical wood products as all current VPA partner countries are tropical and as a focus ontropical wood is stipulated in the IMM project  However, care has been taken to place timber and timber products from VPA partner countries in awider trade context and to ensure that analysis takes account of all competitors, irrespective of whether tropical or non-tropical. Tropical wood products are defined in this report as:

This definition of “tropical wood products” creates some inconsistencies – notably in relation to Viet Nam where a significant, but unknown, proportion of HS44 and 94 products are composed of non-tropical timber, and Brazil, where all HS94 wood furniture is excluded because there is no way to differentiate tropical from non-tropical, or hardwoods from softwoods, in this product category. However, overall it is believed to represent a reasonable compromise capturing, atglobal scale, the vast majority of products more likely manufactured from tropical wood, while excluding the vast majority of products more likely to be manufactured from non-tropical woods.

4. In addition to the EU (inclusive of the UK), IMM identified the following 10 countries as “regulated markets” in 2019: Australia, Iceland, Lichtenstein, Norway,Indonesia, Japan, Malaysia, Republic of Korea, Switzerland, and US.