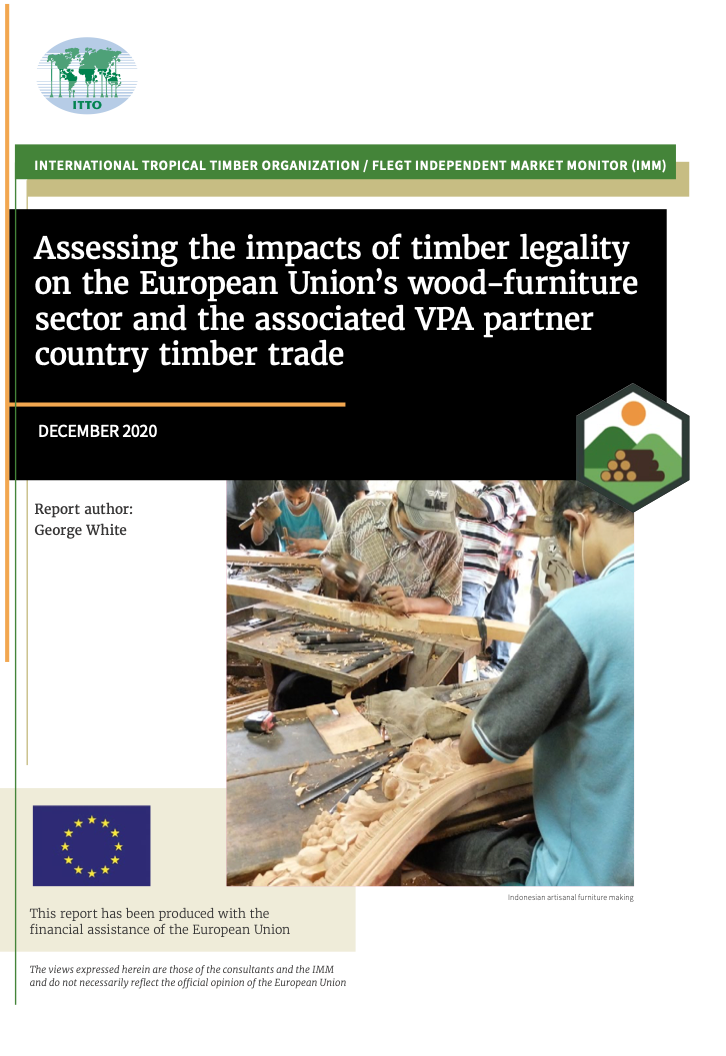 Between 2016 and 2019 EU281 imports of wooden furniture from VPA partner countries have steadily grown from $1.2 billion to $1.4 billion. Viet Nam dominates the total, with nearly $800 million (54%) in 2019. The other major suppliers are Indonesia, Malaysia and Thailand. In 2019, before the market was hit by the COVID-19 pandemic, the EU recorded its strongest year for wooden furniture imports since 2007.

The EU imported wooden furniture with a total value of €7.07 billion in 2019. Wooden furniture imports from tropical countries (including the VPA partner countries) amounted to €1.91 billion.

In 2019 only four VPA partner countries were engaged to any significant extent (99.99% by value) in supply of wood furniture to the EU; Viet Nam, Indonesia, Malaysia and Thailand. Seven EU Member States accounted for 82% of all EU wood furniture imports; UK, Germany, France, Netherlands, Belgium, Italy and Spain.

This report is based on the information obtained from interviews with a total of 34 companies based in Belgium, France, Germany, Italy, the Netherlands and the UK. The companies represented diverse positions in the value chain, from design to manufacture and retail. More than half were distributors, typically importing manufactured furniture ready to be distributed to retailers.

Additional data regarding India, Indonesia and Viet Nam was obtained from 17 interviews with 15 trade associations. Two major associations (in terms of size and interest in furniture and handicrafts) were interviewed in both Indonesia and Viet Nam and eleven associations were interviewed across India. Between the three countries their membership represents over 7,100 companies, the majority of which can be regarded as small to medium-sized enterprises (SMEs).

With interviews conducted in the midst of the COVID-19 pandemic, opinions regarding confidence for the future vary widely, ranging from those hoping for a quick bounce back, to those facing a loss of customers or suppliers. Adaptability and resilience are the key words. At the time of writing, the impact on the industry and global consumers of the health crisis is still profound. The economic crisis of 2008 was, at the time, the worst case scenario. How markets and production will evolve post 2020 looks like an existentialist threat to some and opportunity to others.

Most associations were optimistic for market growth, with the strongest prospects forecast for Australia, Japan and the USA, where few of the respondents foresaw a decline in exports and most saw prospects for growth. This contrasts with the main EU market countries, plus the UK and Switzerland, where several interviewees predicted a decline in exports. The markets identified with greatest prospects for growth within the EU were Germany and the Netherlands.

The producer trade associations perceive China to be the overall most competitive producer, followed by Viet Nam. European, Indonesian and Malaysian producers were perceived at similar levels of overall performance. The lowest perceptions of competitiveness were for Thailand.

The EU and UK interviewees were asked what they considered to be the main challenge of EU Timber Regulation (EUTR) compliance. The overwhelming majority identified the issue of obtaining the required documents to satisfy their due diligence systems as the primary issue.

Nine percent of EU and UK interviewees stated they had stopped sourcing wood from certain countries to facilitate compliance with the EUTR. Twenty one percent of respondents had stopped purchasing from certain suppliers in order to facilitate compliance with their due diligence systems and 12% of respondents had stopped sourcing certain species as a response to their due diligence system. A quarter of respondents stated that FLEGT licensing influences their purchasing decisions and 11% are buying more products from Indonesia post the introduction of FLEGT licensing. A number of others indicated that they are not buying more products from Indonesia, but still see benefits in improved documentation and quicker customs clearance.

Overall, the Vietnamese associations perceived greater business value from the VPA process for their membership. They rated the value to existing markets highly and also saw good value in the potential to develop new export markets. The Indonesian respondents saw most value maintaining sales to existing markets. Overall the Indonesian associations had not seen great benefit to their membership from the VPA process of FLEGT licensing.

The report makes a series of recommendations that: