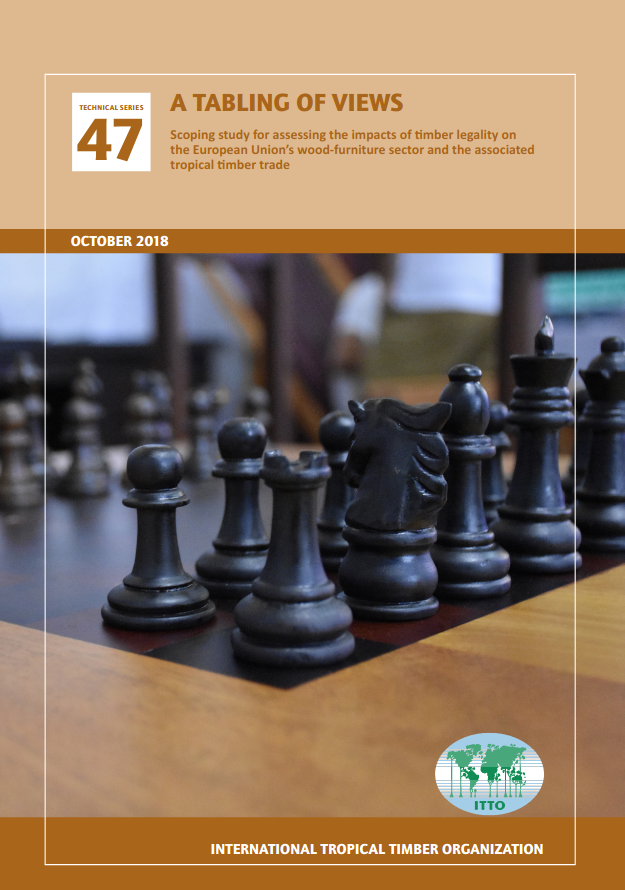 The furniture industry in the European Union (EU) is one of the main sectors involved in the trade of forest products originating in countries that have signed or are negotiating voluntary partnership agreements (VPAs) with the EU. Assembled wood furniture consistently accounts for nearly 40% of the total value of EU imports of timber and timber products from VPA partner countries, which also supply EU furniture manufacturers with a range of wood raw materials, including logs, sawnwood, mouldings, veneer and plywood. The distribution channels and factors affecting competitiveness in this industry are distinct from those in the traditional wood-importing sector.

An earlier report by the International Tropical Timber Organization (ITTO) and the Independent Market Monitor (IMM)1 concluded that, “there is a need to significantly increase coverage in other sectors, notably furniture manufacturing and retailing, and joinery and engineered wood products”. The study reported here, therefore, was conducted to provide a more comprehensive baseline as well as to provide a structure for the IMM’s long-term monitoring of trends in the wood-furniture sector.

The study involved a series of semi-structured interviews—conducted by IMM’s network of national correspondents in April and May 2018— with representatives of 47 companies based in the seven major European markets: Belgium, France, Germany, Italy, the Netherlands, Spain and the United Kingdom of Great Britain and Northern Ireland. Combined, these countries account for 83% of the furniture imported to the EU from VPA countries. It is estimated that there are 130 000 furniture companies in the EU, and approximately 90% of the furniture consumed in the EU is manufactured in Europe. Exporters based in the VPA countries, therefore, are entering a crowded and fiercely competitive market.

The companies that participated in the study represented a broad sample of the value chain across the seven countries, from very large retailers through to medium-sized furniture manufacturers and distributors. The range of furniture products covered includes indoor furniture of all types and outdoor furniture; in addition, a number of companies import raw materials such as sawnwood and panels, as well as furniture components, for furniture manufacturing within the EU.

With a total of more than 850 suppliers of furniture from outside the EU, the companies were asked about their perceptions of quality, price, lead times from order to delivery, logistics (the ease of moving products) and the range of products available from various countries and regions. When asked to compare these variables on a country-by-country basis, it was clear that both western and eastern European EU countries were perceived as most competitive across the range of factors considered. The third-most competitive region identified was that of non-EU countries in eastern Europe. Viet Nam, Indonesia and China were perceived to be the next-most competitive.

The survey included questions on purchasing policies. Around one-quarter (11 of 47) of the companies interviewed did not have written environmental purchasing policies. For those that did have policies, the dominant feature was a requirement for “legality” or legal compliance regarding wood origin or trading (20 companies); the remainder (16 companies) were pro- certification, with a preference for the Programme for the Endorsement of Forest Certification and/or the Forest Stewardship Council.

Products licensed under the EU Forest Law Enforcement, Governance and Trade (FLEGT) initiative were valued by 45% of those interviewed (typically those sourcing from Indonesia). An additional 19% of those interviewed stated that FLEGT licensing could play a role in their purchasing decisions if it were available in other countries. Overall, the companies interviewed were positive towards the FLEGT process, although the lack of availability of licensed products from countries other than Indonesia was a common concern. Some respondents expressed doubt that the FLEGT process had led to on-the-ground improvements in forest governance. The chief benefit identified for those favourably disposed towards FLEGT licensing centred on the linkage with the EU Timber Regulation and the simplified due-diligence process.

The study asked interviewees for their views on the outlook for tropical timber in the European furniture trade. Forty-three percent considered that the market for tropical wood furniture would grow or stabilize in the next decade, and 32% thought demand and volume would shrink (25% expressed no opinion). The wide range of alternative materials and consumer and specifier attitudes towards tropical timber were seen as the main negative drivers.

Fashion largely drives the style and design of wood furniture, with end consumers destined to buy 80% of production. A complex web of interconnected drivers determines the choice of wood and accompanying colours and features. Consumers, retailers and manufacturers have a huge range of options for materials, and the choice of wood in furniture per se is no longer guaranteed. Retailers and manufacturers are promoting certified wood and certified tropical wood to varying degrees; FLEGT-licensed timber has a role to play—but only at a business-to-business level.

The report makes the following recommendations: