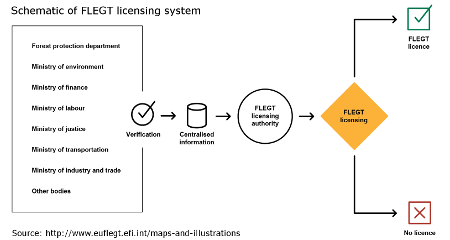 A year on since Indonesia began FLEGT licensing timber exports to the EU, and one EU FLEGT national Competent Authority (CA) commented that introduction of the licensing system had been ‘remarkably smooth and uneventful’. This seems to be the consensus among most Indonesian exporters and EU importers and their respective authorities. At the same time, perhaps inevitably for any new administrative system, particularly one that involves an international spread of businesses and authorities and so many different products, both parties agree that there have been some initial issues with implementation and operational teething problems.

According to Dr Rufi’ie, Director of Forest Products Processing and Marketing with the Indonesian Ministry of Environment and Forestry, one question mark from the Indonesian perspective still hangs over EU market understanding of the FLEGT licensing framework and the value of a licence. In an interview with IMM, he said the feeling was that the EU should do more to encourage market acceptance and “promote the use of FLEGT-licensed timber in public procurement more actively”. It was also felt that the FLEGT licensing system should be underpinned by greater effort “to ensure consistent enforcement of the EU Timber Regulation”, given that a prime attraction of FLEGT licensing is that it grants exemption from further EUTR due diligence.

As regards licensing and import procedures, an important issue that came up in the first year of FLEGT licensing is discrepancy registered by European national CAs between information entered on FLEGT licences and on EU national customs declarations, particularly in terms of Harmonised System (HS) goods classification codes. This is primarily due to room for interpretation when it comes to HS code application and different practices in the EU and Indonesia. According to information from IMM trade survey respondents and CAs, a number of products/codes were affected by such mismatches – most often furniture and ornamental products as well as panel products and in some cases joinery products.

HS Code mismatches between FLEGT-licenses and EU customs declarations typically trigger a request for further information on the part of CAs to the Indonesian Licence Information Unit to ensure that a product shipped from Indonesia is really covered by the respective FLEGT license. This process can lead to delays in customs clearance if communication between the EU and Indonesian authorities is not effective.

It can also, in the worst case, mean that a FLEGT license is needed for the product declared by the European company, whereas the Indonesian exporter did not apply for a FLEGT license as he exported the product under a code not covered by the EUTR. Furniture made of both metal and wood was mentioned to IMM as an example where this can happen, depending on how exactly the companies classify the product.

Where such cases occur, a shipment won’t be able to be released for circulation on the EU market, as under the current Indonesian legislation it is not possible to issue a completely new FLEGT license or to correct an existing one for shipments that have already left Indonesia.

In isolated cases, European importers also reported that they had to pay higher import duties than they were accustomed to, as the HS code used by the Indonesian supplier entailed higher duties than the one customary in Europe. However, most importers and CAs are saying that as long as the HS code used in the importer’s customs declaration is the one that would typically be used for a certain product in the respective country, no extra duties are being applied.

While in some cases differences in HS classification require a government to government agreement on the most appropriate code to be used, in the vast majority of cases both EU and Indonesian private sector can and should play a crucial rule to prevent as much as possible differences in HS code for their shipments, according to the EC. EU importers should always agree on an HS code with their suppliers prior to a shipment and application for FLEGT license, to make sure both parties use the same code. At the same time, Indonesia has agreed under a current joint action plan to adjust its HS codes on a number of items, so that is matches the EU side, according to information from the EFI FLEGT Facility. On a number of other products, the temporary measure is to have Indonesian HS codes on pages 1, 2 and 3 of FLEGT license and EU HS codes on the remaining pages. The final solution will be reached once there is an agreement on this between the Customs, Ministry of Trade and MOEF.

Mismatches typically due to planning errors

EU Member State authorities have also had to deal with FLEGT licences not matching actual shipment volumes and quantities. This, it is reported, results from the time lag between application for a FLEGT licence, licence issuance and actual shipment of a consignment. Exporters, particularly of furniture, are apparently sometimes finding it difficult to calculate the exact amount of products fitting into a container and plan generously when applying for a license. They then fail to inform the licensing authorities about the actual quantities included in the shipment and to obtain a corrected licence before the shipment leaves Indonesia. This explains why in most mismatch cases the actual shipment is smaller than the volumes or unit numbers recorded on the FLEGT license; cases of shipments exceeding the record on the FLEGT license are rare, according the EC FLEGIT IT unit.

According to information from Indonesia, license mismatches occur primarily where smaller companies with less experience and limited organisational capacity are involved. The Ministry of Environment and Forestry and the Licensing Information Unit (LIU) will shortly distribute a Circular admonishing that Licensing Authorties (LAs) and exporters must stay below the tolerated margin of error of 10%. LIU will not assist repeating offenders and take measures again LAs whose customers have many problematic cases. As a result, hopes are that the number of cases will subside in the near future.

Individual cases of license mismatches are sorted out between the European national CAs and the Indonesian central Licensing Information Unit (LIU). The EC and Member States have developed guidance on how to handle these teething problems in the interim while longer-term action is being put in place.

Where doubts arise around a FLEGT licence, national CAs are advised to liaise with the Indonesian LIU to confirm authenticity and with their own customs authorities to establish HS code validity.

Where there is a mismatch between HS codes on the licence and customs declaration, the guidance says this does not necessarily invalidate the licence or require rejection of the cargo. Provided the Indonesian authorities can vouch it applies to the cargo and is in line with provisions of their country’s EU FLEGT Voluntary Partnership Agreement (FLEGT VPA), the licence can be accepted. At the same time, the CA should inform the Indonesian LIU that there has been a reclassification of the shipment.

Where an EU customs HS reclassification takes the shipment into a product category not covered by the FLEGT licensing scheme, they are advised to ignore the licence and release the goods as non-FLEGT, while again notifying the LIU of their action.

In the case of just part of the cargo being reclassified and effectively removed from FLEGT-licensing coverage, that too can be released as non-FLEGT, while the remainder continues as FLEGT-licensed.

If there is a discrepancy between timber species listed on the licence and other customs documentation, CAs could undertake species identification and consequently decide if an HS code reclassification is required. If that is the case, the licensing authority, via the LIU, can be asked to issue a revised ‘duplicate’ licence.

When a mismatch on volumes of goods on the licence and in a container occurs, the EU CA is also advised to clarify the reason with the LIU and, if necessary, request a revised licence from the licensing authority.

In cases of a discrepancy in numbers of units of goods, if there are more and the LIU can vouch for the licence and give a reason for the mismatch, the CA can either request a revised licence or accept the original. If the extra cargo exceeds the license by more than 10%, an adequate justification for the discrepancy and a revised license will be needed in any case before the shipment can be released. Where the quantity is lower, the CA should again contact the Indonesian body and, if necessary, request a licence revision.

These processes are reportedly working well in most instances and LIU is working on optimising them further. Nonetheless, the need to obtain additional information to confirm the validity of the licence is time-consuming and can lead to delays in customs clearance or in extreme cases involve higher costs or “disposition” of a license, which means the shipment won’t be cleared for circulation in the EU at all. The EC and Indonesian authorities say they are in constant contact, trying to improve processes and raise awareness among companies in both Indonesia and Europe to ensure a reduction of overall cases.

Some EU trade respondents to the IMM 2017 survey said they had been disappointed by the lack of private-sector oriented communication both from the EC and some national CAs, especially around the start of FLEGT licensing. “FLEGT licensing has taken so long to start and then suddenly it was there, without much prior warning and we didn’t feel well prepared”, said one major furniture importer. Especially in the early months of FLEGT-licensing, companies in certain countries apparently found it hard to obtain information as to why their shipments were being held up at customs and were facing delays in customs clearance. Other companies found that the procedures involved in importing FLEGT-licensed timber were more time-consuming than exercising due diligence for Indonesian timber, at least to start with. In some cases, they paid to outsource the work to agents.

However, such comments came primarily from countries where EUTR implementation and enforcement started relatively recently and EUTR due diligence may not always have been of the highest standard. Their awareness of the FLEGT process may also have been relatively low, as the IMM EU trade survey shows. Still these criticisms highlight a continuing need to bridge communication gaps. This was borne out by the IMM European trade survey, with participants in all countries covered feeling that better information and mechanisms for taking private-sector views and concerns into account were crucial.