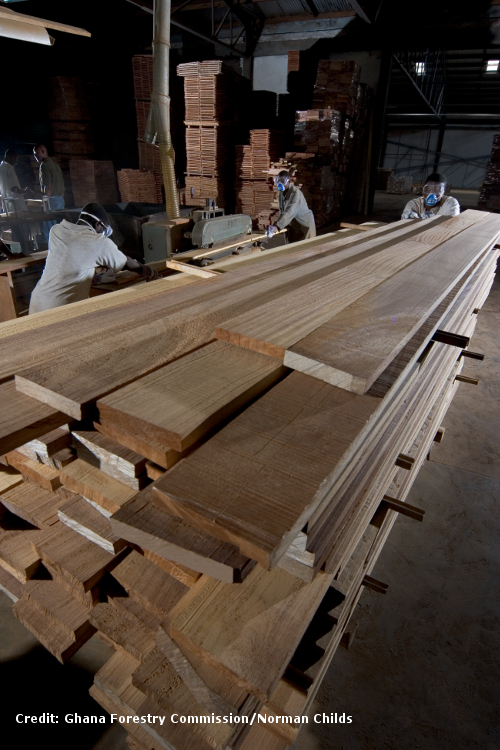 IMM has released a major new report on “FLEGT VPA Partners in EU Timber Trade 2014 to 2016” which updates key forest resource and trade data contained in the 2015 IMM report on “Europe’s changing tropical timber trade”. The two reports together assess the baseline conditions for entry into the EU market of FLEGT licensed timber.

Using the latest data sources, the report assesses the overall extent and recent changes in forest area and timber volume in VPA partner countries. It comments on the relative competitiveness of timber industries in these countries, noting that those with globally competitive business environments are increasingly focusing on exports of higher value products, while those less well integrated into the global economy are still dependent on trade in primary wood products.  The report describes the intensifying competition, both for raw material and market share, from China and other emerging markets, for timber industries located in VPA partner countries.

The report shows that the total value of global trade in tropical wood products increased 13% to peak at US$35.0 billion in 2014 before sliding to US$31.1 billion in 2016. The sharp rise and subsequent fall in trade was largely driven by market developments in China, particularly a short-lived speculative boom in imports of tropical logs during 2014, mainly rosewood species from the Mekong region and Africa. The spike in exports to China was particularly pronounced for Lao PDR, Thailand, Myanmar, and Viet Nam.

Recognising that the first ever FLEGT licenses were issued by Indonesia in November 2016, the latest IMM report includes additional commentary on the prospects for Indonesian timber in the EU and wider international market. The report notes that a key trend during the review period was a rise in Indonesia’s share of global trade in tropical wood products. In 2016, Indonesia accounted for 18.2% of the total value of global tropical wood exports, a rise from a low of 17.2% in 2014. This increase was a reversal of a long-term trend of declining share in relation to countries of the Mekong region, particularly Thailand and Viet Nam.  The rise in Indonesian trade between 2014 and 2016 was concentrated in wood furniture, together with decking, plywood, and joinery products such as doors and laminated window scantlings.

In contrast, the five VPA-implementing countries in Africa accounted for 4.2% of global trade in tropical wood products in 2016, continuing a long-term slide in share from 5.1% in 2011. After a short-lived boom due to the rise in rosewood exports to China in 2014, tropical wood exports from West and Central Africa sunk to their second lowest level in the last decade in 2016, only marginally greater than exports in 2009 in the immediate aftermath of the global financial crises. VPA implementing countries in Africa were falling further behind Asian countries in efforts to develop internationally competitive export markets for high value wood products such as furniture.

The report shows that the economic background in the EU created challenging market conditions for timber products from VPA partner countries during the 2014-16 review period. VPA partner exporters had to contend with the relative weakness of the euro and other European currencies, the slow pace of EU economic recovery from the financial crises, the dominant position of European and Chinese manufacturers in many market segments, the strong fashion for temperate woods (particularly oak), intense and rising competition from a wide range of non-wood substitutes, and uncertainty created by the Brexit vote in June 2016.

However, the report also shows that tropical countries regained a little share in EU import value between 2014 and 2016. This was mainly at the expense of Russia and non-EU European countries in 2015 and of China in 2016 and was particularly pronounced for sawn wood and furniture, although there were minor gains for all other product groups.

The report highlights that a key trend in the EU creating significant challenges, and a few new opportunities, for wood products suppliers in VPA partner countries is growing demand for engineered wood products (EWPs) in a wide range of wood applications. The trend is closely linked to the move to rising quality and efficiency standards in the EU and to more modular forms of off-site, prefabricated construction.

The report emphasises that the immediate market advantage of FLEGT licensing should derive from implementation of the EUTR which gives licenses a green lane through the due diligence requirements. Drawing on a variety of reports published by various EU agencies and data collected in IMM pilot surveys in 2015, the report indicates that, after a slow start, enforcement of EUTR was being stepped up during the review period and having a more significant impact on procurement practices.

Although work is still required to improve levels of awareness, the report indicates that the private sector in the EU is generally enthusiastic about the prospects for FLEGT licensed timber to reduce legality risk and costs of due diligence, and would give preference to FLEGT licensed timber over unlicensed timber.  Some larger influential companies expressed very positive views about the potential of the FLEGT VPA process to help restore the image and market share of tropical timber.

Amongst numerous other recommendations, the report emphasises that EU efforts to ensure consistent and effective enforcement of EUTR should be given the highest priority to maximise market advantages of FLEGT licensing. It suggests that EU member states should be encouraged to give appropriate recognition to FLEGT licensed timber in their public procurement policies, recognising the wider forest governance reforms inherent to the VPA process. It also identifies a critical need to improve communication and raise market awareness of the steps required to implement a FLEGT licensing system, and emphasises the need to engage the private sector to bring accurate messages about FLEGT licensing into business-to-business dialogue.

The report ends with a word of caution, noting that while the FLEGT licence is a credible endorsement and an essential underpinning for market development in the EU, it is unlikely to deliver significant or sustained increases in market share in isolation. Imported timber products, not just from the tropics, are struggling to compete with domestic suppliers and non-wood substitutes in the EU. All actors need to avoid raising expectations of immediate market gains in what is better presented as a long-term process of market transformation. FLEGT partners also need to consider how FLEGT licenses fit within their broader timber industry and export development strategy.